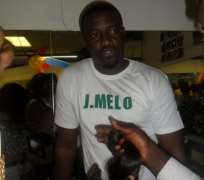 A three-day tour (Mustapha A Inusa) had with Ghanaian actor John Dumelo in South Africa has revealed to us that Ghanaian movie stars have great prominence in South Africa.

As part of his plans to open outlets throughout the world, John Dumelo has toured countries like America, United Kingdom, South Africa, and will be ending it in Zambia this weekend.

At his launch in South Africa, the program started on the 9th of February in one of the leading Night clubs named 'Hush Club' and continued with the main executive launch in one Ghanaian Saloon named 'Salon le Difference' around Pretoria Macdonald, opposite Capitec bank.

He revealed to the spectators that he has realized that majority of the fans who came to the launch complained that the price of the hair was expensive but assured them his brand was quality.

“Well, I have realized most of you are complaining about the prices but the only thing I can say is that my J.MELO hair which is made- up of Mongolian/ Combodian is of higher quality than the Brazilian hair, Indian hair or any other hair and don't forget, anything with quality comes with superior price.With this hair you can use it for more than 6 months,” he said. “I Don't Like That Other Boy Called D'banj” – Majek Fashek

QUOTE OF THE DAY: Sex is Created For People Who Are Married- Rapper Eva Alordiah