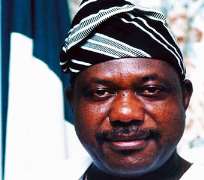 Akume was dragged before the court by one Phillip Agbese through his counsel, Amobi Nzelu. Agbese, a civil right activist, is praying for a declaration that Akume did not possess the West African Examination Council (WAEC) certificate number SCO 39633 allegedly issued to him by Government Secondary School Oturkpo, Benue State in 1971.

Agbese is also asking the court to declare that the result allegedly issued to Akume by WAEC did not belong to him and that the defendant did not obtain any degree from the University of Ibadan or any recognised university in Nigeria.

The plaintiff also asked the court to declare that all the documents presented to INEC by Akume consequent upon which he was cleared to contest the gubernatorial election in Benue State, especially the West African Certificate No SCO 39633 and the University of Ibadan certificate and NYSC discharge certificate No. 043655 were false.

He also requested a declaration that the senatorial seat of Benue North-West senatorial district of Benue State being occupied by Akume was vacant having not possessed the requisite qualification to contest for the said position.

He therefore asked the court for an order directing WAEC to produce the duplicate copy or certified true copy of the certificate No. SCO 39633 allegedly issued to Akume.

He also prayed the court to order NYSC to produce the certified true copy of certificate No. 043655 issued to Akume and to declare vacant, the senatorial seat of Benue North-West senatorial district of Benue state currently being occupied by him.

Agbese also asked the court for an injunction restraining Akume from parading himself as a Senator representing Benue North- West Senatorial district of Benue State.

In a 24- paragraph affidavit deposed to by the plaintiff, he averred that the document submitted to INEC by Akume for clearance for the senatorial election were not made known to the public as required by law to enable people raise claims and objections.

He also averred that the documents submitted to INEC by Akume consequent upon which he was cleared to contest the election were fake and forged .

Furthermore, he averred that in 2002, an extract was given by the police stating the loss of certain documents by Akume and advising him to go to the place of issuance of replacement and that after eight years of the issuance of the said police extract to the 1st defendant, he swore to an affidavit on September 23,2011 alleging in the said affidavit the missing documents with numbers.

Agbese also averred that the 1st defendant at all material times to the said elections (gubernatorial and senatorial elections) was not qualified to contest those elections.