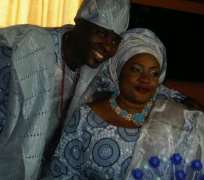 Popular yoruba actress, Foluke Daramola few hours ago had a traditional wedding with the new man in her life.

Foluke Daramola's new husband is Kayode Salako, the man behind a Lagos based pressure group called FASHOLAMANIA. He is also the promoter of a group known as Change Agent of Nigeria Network.

The traditional wedding today makes it the second time the actress will be getting married. Foluke was formerly married to Tunde Sobowale, son of Ex- Lagos State Commissioner for Education, Prof. Sobowale.

The wedding ceremony between Foluke and Tunde was a talk of the town, as the then governor of Lagos, Asiwaju Bola Tinubu was the chairman of the reception.

The union produced two kids before it crashed few years back.

Foluke's new marriage is also with it's own stinking scandals as it was alleged that the actress destroyed Kayode Salako's 13 year old marriage to his wife, Olubukola.

Olukubola who is said to be a Pasor at the Redeemed Christian Church of God packed out of her matrimonial home some months back when her husband refused to end the romance with the busty actress.
Culled from Yemojanews

How TB Joshua Saved Me From Mental Illness--Hanks Anuku