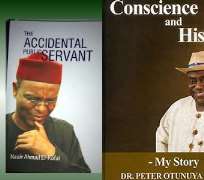 Nigerian elites are definitely in a very hot race of their lives to cover up their collective act of economic genocide that they have since the last five decades unleashed on an unprecedented scale on the citizenry by their unbridled quest to consistently corner to their private pockets the commonwealth of our Nigerian nation.

In the last few months, evidence emerged that some of these members of the political elite have engaged in writing and publishing books to white-wash their roles in the poverty dilemma that has bedeviled Nigerians.

These new generation authors among the political elite want to paint themselves as messiahs of the masses.

From the Southern state of Rivers, erstwhile governor Dr. Peter Odili recently introduced his widely advertised autobiography titled; conscience and history; my story”, in which he sought to debunk the groundswell of allegations of misappropriation of state fund when he presided over as governor between 1999 to 2007.

Peter Odili, an accomplished medical doctor whose wife (Mrs. Mary) has risen to the pinnacle of her legal profession to take a seat at the prestigious Supreme Court of Nigeria, has come under considerable criticism for not making use of the huge crude oil revenue accruable to the state of Rivers from the federation treasury as the largest crude oil producing state, to better the lives of the population when he took charge for eight years as the governor.

Peter Odili is accused of benefitting from an absurd court injunction which perpetually appears to have stopped the Economic and financial crimes commission (EFCC) from ever arresting and charging him to court to answer to certain charges that huge public fund developed wings and flew into private bank accounts during his eight years sojourn in the River state government house as the chief executive who enjoyed the immunity clause as provided for by section 308(1) of the 1999 constitution (as amended).

Questions were asked how come that a court of law in Nigeria, in this instance, the Federal High Court, could grant a perpetual injunction frustrating the discharge of constitutional duty by a body created by the legal statutes to fight corruption and economic crimes.

Still, observers wonder why the Economic and Financial Crimes Commission (EFCC) has yet to successfully quash the subsisting injunction at the appellate level or transfer the matter for investigation and prosecution to the police or the independent corrupt practices and other offences commission (ICPC) to take up the prosecution of former governor Peter Odili for those same allegations for which EFCC has been stopped by the so-called perpetual injunction of a Federal High Court, Port Harcourt Division.

All together, the conclusion that can be drawn from all the emerging scenarios in the Peter Odili’s botched trial is that the political elites who control the machinery of law enforcement and dispensation of justice have entered a grand scale conspiracy against the ordinary people who would have expected the court system to compel the erstwhile Rivers state helmsman to answer to those charges of corruption and for the court system to reach an acceptable determination of that matter without let or hindrance.

In the new book colourfully published by ex-governor Peter Odili of Rivers State, Nigerians were copiously told that he was transparent and accountable while he served the good people of Rivers state just as the author blamed the then Nuhu Ribadu – led Economic and financial Crimes Commission (EFCC) for embarking on 'wild goose chase', blackmail and vendetta against him for daring to stand election for the highest office in the land in the 2007 presidential election against the interest of the powers-that-be in Abuja.

Odili wrote in his book thus; “On 12th December 2006, a spurious and anonymous petition was posted on the internet from a questionable ‘source’ alleging corrupt practices against the Rivers State government under me. These allegations were contrived into a petition by the EFCC under Nuhu Ribadu’s hand, to the President (Obasanjo) the same day”.

Odili in his book also claimed that; “On the 13th of December 2006, Mr. President directed EFCC to investigate. On the 14th day of December 2006, EFCC submitted a so-called ‘interim’ report to the then President who promptly minuted for my response on the same 14th December, 2006, but forwarded to me on the 15th of December 2006, a day to the National convention [of the Peoples Democratic Party]”.

“We submitted our response on the December 15th 2006, by which time it had become clear what the whole exercise was about – ‘get Odili out of the race for the presidency at all cost”.

He then proceeded in the same book to extensively display photographic evidence to demonstrate that the resources of Rivers state under his administration were transparently disbursed and applied.

Although I have no superior reason to contradict those graphic evidence adduced by Peter Odili in his book but one salient question begging for answer is why there is so much poverty and gross underdevelopment in Rivers state even with the huge resources at the disposal of the state administration?

By and large, the poverty trap in which most Nigerians have found themselves is generally as a result of the deadly conspiracy of the political elite because of the mistaken belief that a population under occupation by economic poverty will not have the serenity of mind to ask the right probing questions and demand for sound answers from their political leaders.

These elites also forgot conveniently that a hungry man is also an angry man. The fact that there are too many hungry and angry Nigerians is not in dispute. The high crime rate is one clear evidence of this stark reality.

Another example will suffice to show that members of these political elite who benefitted from the system have now resorted to writing books to hoodwink the reading public.


The former minister of the Federal Capital Territory (FCT) who had served as the Director General of the Bureau for Public Enterprises (BPE), accused of selling off choice national assets to cronies of government officials has also written his own book.

“The Accidental public servant”, by Mr. Nassir El Ruffai is currently receiving extensive bashing from a cross segment of the political elite for misrepresentation of facts and for simply elevating fictions and figments of his imagination into the realm of reality.

Former Vice President Atiku Abubakar who got bitter dose of attack in the new book by Mr. El Ruffai, has taken up advertisement spaces in national newspapers to puncture some of the narratives contained in the book by the former Abuja minister who was banned by the Senate of the Federal Republic of Nigeria from holding public office for ten years following allegations of fraud which he allegedly committed as the minister of the Federal Capital Territory.

The former minister of Abuja was accused of serial land scams and for converting choice landed assets in the nation’s capital to his private assets using his children as fronts. He has gone to the Federal High Court to seek to squash his indictment by the National Assembly.

In the book by the former Abuja minister, he disclosed how he cleverly maneuvered and/or manipulated the extant law setting up the Bureau for Public Enterprises [BPE] as the then Director General to procure fund budgeted for the agency which he generously handed out to the then foundation chairman of the Economic and Financial Crimes Commission (EFCC) Mr. Nuhu Ribadu.

Ribadu, who was then an assistant Commissioner of police was handpicked by then President Chief Obasanjo on the recommendation of his then Federal Attorney General Mr. Kanu Agabi (SAN) to head the new anti-graft body which President Obasanjo set up few years after he had set up the Independent Corrupt Practices and allied offences Commission [ICPC].

To underscore the general state of sophisticated conspiracy of the elite to continue to enthrench economic crimes that impoverishes the greater percentage of Nigerians, the Economic and Financial Crimes Commission (EFCC) was set up by President Obasanjo without making arrangement on how it will obtain take off fund to prosecute an all out war against economic crimes in compliance with the Constitutional provision in section 15 (5) which provides that “the state shall abolish all corrupt practices and abuse of power”

This conspiracy of the ruling elites and their cronies in the private sector of the economy to perpetually imprison the greatest majority of Nigerians in the absolute poverty trap came out in the open recently when the former education minister Mrs. Oby Ezekwesili who recently retired from the World Bank as Vice President for African region, alleged sensationally, that the late Yar’adua and the current Jonathan administrations have squandered $67 Billion USD of public fund which the Obasanjo’s government handed over to the incoming government.

Rather than set machinery in motion to extensively verify the allegations, what the government has done so far is to issue unintelligent responses attacking the messenger instead of responding intelligently to the message. This is the pattern adopted consistently by the ruling elites to undermine the regime of transparency, accountability and zero tolerance to corruption and the consequence of this is that greatest number of Nigerians are trapped by absolute poverty even while the tiny fraction that make up the elites smile to their banks with the nation’s wealth.

The general state of impunity needs to be overthrown through consistent civil society- driven mass action and intense pressure so that government officials are compelled to respect the law and for institutions put in place to check profligacy and heist of public fund are empowered to carry out these duties.

The suffering masses of Nigeria must stop chasing after mere bread and butter to fill up their hungry stomachs but must turn their civil attention to how the nation’s wealth are disbursed, applied or misapplied and shout to high Heavens for justice to be done.

Religious leaders have betrayed the trust of the ordinary Nigerians by alligning themselves with the oppressors of the masses who are the political elites. Some of these religious leaders have lost their moral voices because they are living ostentatious lifestyle like flying in private jets bought through suspicious means. Our freedom is in our hands as ordinary Nigerians.

Joseph Stiglitz, one of the three economists to share the 2001 Nobel Prize for the Economic Sciences spoke eloquently about the evils of poverty in the following words; "The number of people in poverty in many of the countries actually increased. In some of the cases, it wasn't just that the gap between the poor and the rich increased, but the people at the bottom actually went down..."

The above is the perfect scenario depicting our Nigerian existential situation in which nearly 110 million of the 167 million population are in absolute poverty. Should we let this huge moral burden of poverty trap in which many of our people are enslaved to continue even with rich resources being cornered to private pockets of political elites, to continue?