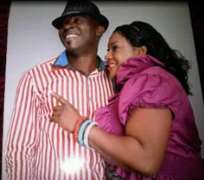 Reports reaching us have it that Nollywood actress, Foluke Daramola, who recently started a relationship with Lagos socialite, Kayode Salako, will tomorrow, Friday, February 15, 2013, perform her traditional wedding ceremony.

The traditional wedding, as we learnt, will take place in Lagos.

Efforts to speak with Foluke on this piece of news was not successful as she told us to call her back when she was contacted to confirm the story yesterday.

An SMS was sent to her few hours before publishing this story but it was not yet responded to.

A source close to her lover, Kayode, confirmed this story to us and gave details of where the traditional wedding will hold.

Foluke, in 2012, began a romantic affair with Kayode just when Kayode's estranged 'wife' moved out of her matrimonial home. It was widely believed then that Foluke was largely involved in the marriage crash. She has since denied that rumour.