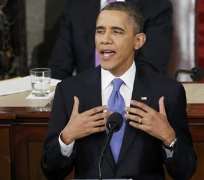 The U.S. stock market is unlikely to take much direction from Tuesday's State of the Union, although President Barack Obama was less combative in his tone than some on Wall Street expected.

Obama's speech provided little in the way of guidance as to whether the White House and Congress will come to a deal to head off large spending cuts that are set to come into effect as of March.

The broader market has not been overly concerned about the potential effect of $85 billion in automatic spending cuts that would hit the defense sector hard.

The president presented a number of new initiatives - including a proposal to raise the national minimum wage to $9 an hour - but the difficult path many proposals face in getting through Congress means reaction from individual shares will likely be muted.

"The State of the Union address by the president should not be impactful to the markets," said Doug Kass, founder of hedge fund Seabreeze Partners Management Inc in Palm Beach, Florida.

The equity market has rallied sharply in the first six weeks of 2013, in no small part as a result of the deal cut to avoid the "fiscal cliff" and the Republican House's subsequent decision not to use the debt ceiling as a bargaining chip for spending cuts.

Headed into the speech, S&P 500 futures were up marginally, and barely moved during the course of Obama's address.

Obama urged a resolution to the budget battle over the so-called sequester, the package of automatic spending cuts scheduled to take effect at the beginning of March. However, the two sides are currently far from a compromise.

If lawmakers do not come to an agreement over the cuts, it will reduce federal spending across the board by about $85 billion for one year. The cuts would be split between military and domestic programs.

"Neither side particularly wants the sequester, but the process of getting from here to there will probably be painful to watch, just like the fiscal cliff was," said Bucky Hellwig, senior vice president at BB&T Wealth Management in Birmingham, Alabama.

The philosophical divide over whether to reduce the deficit through raising taxes or cutting spending still stands, said Hellwig.

Most State of the Union speeches see less than a 1 percent move in the stock market on the following day. The average move is only 0.15 percent since 1934, according to LPL Financial.

The energy and gas sector might see a short-term bump from the speech. Obama pledged to cut red tape to encourage more drilling for domestic natural gas, while also vowing to push for more and cheaper solar and wind energy.

"To me, the biggest news was it seemed to embrace the energy revolution more so than to trying to control it," said Hellwig.

Still, those stocks may not see a pop tomorrow because the speech is typically seen as being geared toward policy rather than specific proposals, said Hellwig.

"Looking at futures, what they're telling me is all this is in the market," he said.

Although Obama backed a $50 billion program to fund infrastructure rebuilding projects such as fixing aging bridges, many Republicans are adamantly against such stimulative government spending, which could temper any potential upside for stocks such as Caterpillar Inc (CAT.N), the world's largest maker of construction equipment.

Similarly, analysts said the effect of the president's proposal to raise the minimum wage for workers from $7.25 to $9 an hour is likely to be ignored. Companies with large workforces at the lower end of the pay scale - such as McDonald's Corp (MCD.N) and Wal-Mart Stores Inc (WMT.N) - could be vulnerable to a hit in their stock but Republicans typically oppose increases in minimum wage.

"If you raise the minimum wage 20 percent and index it for the cost of inflation, that will significantly impact the profitability of companies," said Michael Yoshikami, CEO and founder of Destination Wealth Management in Walnut Creek, California.

"There might be a small reaction tomorrow but it will be very temporary because in the end most people probably recognize this is more posturing than anything else."