Trained talent is the yeast that transforms a society and makes it rise - Lee Kuan Yew, former Prime Minister of Singapore in his 'From Third World to First: The Singapore Story, 1965-2000'

INTRODUCTION: The title of this lecture, 'Education sector in Crisis' in reference to any country must be considered a cause for serious concern because of the great value attached to education world-wide. 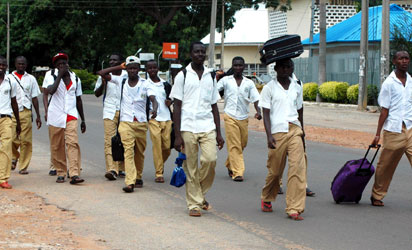 Students of Kaduna State Technical College going home due to the 24 hours curfew imposed on Kaduna on Wednesday. NAN Photo.

It is widely acknowledged that education has social, economic, political,and security benefits for an individual, for a society and for a country:  Education is almost everywhere considered as the key to economic prosperity and a vital instrument for combating disease, tackling poverty, and supporting sustainable development.

At the international level, 'Education for All' (EFA), an initiative of the United Nations Educational, Scientific and Cultural Organisation, UNESCO, was launched in 1990. Twenty-two years later, UNESCO's parent organisation, the United Nations, launched 'Education First Initiative'that seeks to unite businesses, governments, nongovernmental organisations, teachers, parents and pupils in a 1,000-day campaign to get every child into quality education by the end of 2015.

Former British Prime Minister, Gordon Brown, who is UN special envoy for global education, put the case for the new Initiative as follows: Under current trends, 50 million children worldwide will be out of school in 2025, and in 50 years education for all will remain a hollow dream…the cause of educational opportunity [is] the civil rights issue of our generation (bold and italics added)…Extending educational opportunity is a moral, economic and security imperative… In-between these two initiatives, there was the United Nations Millennium Declaration of 2000 that included education as one of Eight Millennium Development Goals (MDGs). Specifically, according to MDG 2 the goal is to 'attain universal primary education in all countries by 2015' and the Target is to 'ensure children of both sexes everywhere will be able to complete a full course of primary schooling.' Nigeria joined 189 other countries world-wide to endorse the Declaration.

Strikingly, the success story of educational development in Western Nigeria in the 1950s and early 1960s was characterised by actions that respond to the issues raised in the preceding paragraphs. A free universal primary education (UPE) programme was launched in January 1955 and politicians and civil servants collaborated to ensure its effective implementation. The public was mobilised in support of UPE: there was active involvement of communities, faith-based organisations, private entrepreneurs, and parents/adults through payment of taxes. (Parents also provided uniforms and books for their children).

After a decade (that is, by 1965), primary education completion rate was between 80 and 100 per cent throughout Western Nigeria. Furthermore, the launch of universal free primary education was accompanied by rapid expansion of post-primary education: five-year Secondary/Grammar Schools and three-Year Modern Schools.

The latter were introduced to provide post-primary education for the hugely increased primary school leavers who could not gain admission to the Secondary/Grammar Schools. Simultaneously with the launch of UPE, teacher training was significantly scaled up through the expansion of colleges responsible for training teachers for primary and post-primary education.  Finally, in 1962, the Western Nigeria government established a university (University of Ife, later re-named Obafemi Awolowo University) and in 1963, Adeyemi College of Education was established.

From the above summary it is obvious that the Western Nigeria experience has important lessons for all advocates of rapid educational development world-wide, with particular reference to universal primary education.

Yes, UPE can be successfully implemented and yield huge dividends within a decade. The experience also demonstrates that successful implementation of UPE requires attention to secondary education, teacher training, and tertiary education.

After this Introduction, the Lecture is in three other parts. In Part two, I provide evidence of the crisis in Nigeria's education sector that justifies the title, 'Education Sector in Crisis.' Part three highlights the major causes of the crisis. In Part four, I proffer some possible remedies that could help re-launch the country on the path to educational excellence. In closing, I offer 'A Word for JABU: Challenge of Being Part of the Solution' and a 'Last Word'.

Part two: evidence of crisis: The word 'evidence' is used here not in the legal sense but in the ordinary dictionary meaning such as what is provided in The New Oxford Dictionary of English: 'the available body of facts or information indicating whether a belief or proposition is true or valid.'

Since I returned to the country about eight years ago, I have read reports in the country's newspapers that constitute strong evidence of a crisis in the education sector at all levels: fromprimary education through secondary to tertiary education. From time to time, politicians, academics and opinion leaders either called for the declaration of a 'state of emergency' in the education sector or lamented what they consider as decline and decay in the education sector: while some affirm that 70 per cent of university graduates are unemployable because of their poor quality, others focus on the country's slow progress towards meeting the MDG goal on completion of primary education by all school-age children (female and male) by 2015.It is sad to note that a national dialogue on 'Nigeria and Education:the challenges ahead' held almost two decades ago concluded that 'The nation must now consider seriously the desirability of declaring a five-year emergency… for the rescue of our educational system' (Akinkugbe, 1994, p. 329).


At the personal level, I was reminded of the lost era of educational excellence when in late 2000s, a taxi driver, who drove me in Lagos and who only completed Modern School education in the 'old' Western Nigeria, was more articulate in spoken English than some current first degree holders!  I summarise below selected 'facts' and 'information' on the decline and decay in the country's education sector.

•10.5 million Nigerian children of school-going age are not attending school - highest in the world. Source: Education For All (EFA) Global Monitoring Report 2012. (Introduction of EFA goal of one-year Early Childhood Care and Education - three years in Sweden - is unlikely to happen soon).

•According to the World Economic Forum's Global Competitiveness Report Index, 2011-2012, Nigeria was ranked 140th out of 144 countries in primary education enrolment.

•'National Planning Minister, Shamsuden Usman, said two years ago… that Northern Nigeria harboured the highest number of school-age children in the world that were out of school'.

•Enrolment of children into schools is as low as 12.0% in some states.

•6 million of 36 million girls out of school world-wide are Nigerians.

• In 2008, Kwara State tested 19,125 teachers in Primary Four Mathematics… Only seven teachers attained the minimum benchmark for the test in Mathematics. Only one of 2,628 teachers with degree passed the test; 10 graduates scored zero. The literacy assessment recorded only 1.2 per cent pass.

• 'The single biggest problem (in Nigerian universities) is the abysmal quality of the intake; the vast majority of my students barely know their grammar, never mind the poor quality of their knowledge.'

•According to the World Economic Forum's Global Competitiveness Report Index, 2011-2012, Nigeria was ranked 120th out of 144 in secondary education enrolment.

C.  Universities: Some specifics on decline

•'The most ridiculous indication of the rot in our universities was the recent reported dismissal of three graduates of the Enugu State University of Science and Technology from the National Youth Service Corps scheme for falling below the standard expected of graduates.' (The university is reported to have declared 'an academic emergency.'

•'There is an average of 4 abandoned projects per university in Nigeria' - with negative consequences for classrooms, laboratories, students' hostels, and staff accommodation. Poor infrastructure adversely affects teaching, research, learning and students' health and safety.

•There are 75,000 Nigerian students in Ghana who pay not less than N160 billion as tuition alone annually, compared with the annual budget of N121 billion for the entire federal universities in Nigeria.

• In 2010, Nigerian students spend about N246 billion in tertiary institutions in UK, more than 60 per cent of education sector budget in 2012.

•Universities do not have adequate supply of Ph.Ds but Ph.D holders seek graduate-level positions and some compete to be truck drivers.

In addition to the above sector-specific illustrations, broad-gauged evidence of huge decline in all aspects of quality education measurement on an African comparative basis is provided in Table 1 above. It is based on the 2012 Mo Ibrahim Good Governance Index, Education Sub-Category of the Human Development Category. (The three other Categories of the Index are: Safety and Rule of Law; Participation and Human Rights; and Sustainable Economic Opportunity).

The six indicators used to calculate the scores recorded in the Table are: education provision and quality, ratio of pupils to teachers in primary school, primary school completion, progression from primary to secondary education, tertiary education, and literacy. According to the evidence, education performance in Nigeria declined significantly between 2006 and 2011: score declined from 51 per cent to 47.6 per cent in and Nigeria's rank declined from 21st to 30th.

Part three: Causes of the crisis: Three major causes of the crisis in the education sector are examined in this Lecture: (i) over-centralisation; (ii) implementation failure; and (iii) de-emphasis on the value of education and decline of the teaching profession. Some other causes of the crisis are linked in varying degrees to one or the other among the three main causes highlighted and they will also be mentioned, as appropriate. The problem of corruption deserves special mention. Although it is not highlighted as a major cause of the crisis, it will feature prominently as it is uniquely linked, in varying degrees, to both over-centralisation and implementation failure.

The role of the federal government in primary education is limited to prescribing minimum standards as provided in the Constitution's Second Schedule, Exclusive Legislative List, 60 (e). Sadly, two civilian presidents have maintained this usurpation. Former president Yar'Adua committed to abandoning this bad practice but he died within a year that he turned his attention to the subject. ('I have also directed that all laws be examined that go against the federal system so that they will be amended to be in conformity with the federal system of government' (interview with London's Financial Times reported in various national newspapers, May 20/08). President Jonathan appears to be agnostic on the subject. In this area, it would be correct to assert that there has been leadership failure.(b) The military established unitary secondary schools, again contrary to the assignment of this function to sub-national level governments in the 1963 Constitution it suspended:only higher education was on the Concurrent Legislative List.  Now, Federal government involvement in post-primary education is currently provided for in the 1999 Constitution: 'the National Assembly to establish institutions for post-primary education' (Second Schedule, Part II, Concurrent Legislative List, (28).