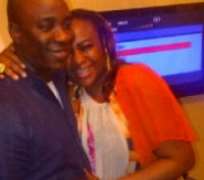 K1 treated his guest to an elaborate naming ceremony event that later turned out to be a carnival-like occasion. This was held at his Ijebu Ode home in Ogun State.

Top politicians, socialites, music artistes and fans from both Lagos and Ogun States thronged the event to celebrate with K1, who was visibly overjoyed by the massive turn-out of people to Fathia's christening.