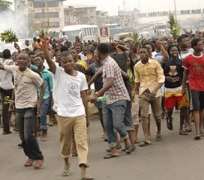 The officials were on a "thank you" visit with members of the party in Isoko North Council Area of the state when they were confronted by the irate youths at Ekuigbe-Iyede, the country home of DESOPADEC Commissioner, Mr. Joe Ogeh.

The delegation which included member representing Isoko North in the State House of Assembly, Hon. Tim Owhefere, were pelted with pebbles and chased with sticks just after they were about settling down for the business of the day at the community market square.

The protesters, chanting ijii, ijii, ijii (meaning thieves, thieves, thieves), stormed the venue with various placards with inscriptions such as 'PDP Leaders You Are Disappointment, Failure (sic)' and "Stop Deceiving Us" among others.

The incident would have recorded some fatalities but for the presence of mobile policemen who provided cover for the politicians before escorting them out of the area after releasing some volleys of bullet to disperse the protesters.

"The security operatives opened fire in the market square to disperse the protesters in order to pave an escape route for the embattled politicians," an eyewitness said.

It was not immediately clear what was the rationale behind the protest, giving the fact that the other areas where the political leaders visited were relatively peaceful.

However, a source said there's grave anger in the council area particularly against the DESOPADEC member and House of Assembly representative from the area.

An aggrieved protester, who simply gave his name as Ejiro, shouted; "We are angry because these same politicians have spent various terms in the National Assembly, State Assembly and forever in government, yet our lots have failed to improve. Every year they come to dole pittance to us when they know election is near.

"(Hon) Ogor for instance has been in Abuja for nearly 16 years and yet no development. Tim Owhefere (representing Isoko North is also in his second term, yet no state or federal presence here. Today they came and gave us N500,000 to say thank you; how long is that going to last us?"

But reacting to the incident, Macaulay attributed the incident to money, saying,"Is there any society even among you now, if I throw N100, 000 up now wouldn't there be crisis?"

He refuted the insinuation that the visit is a way of preparing for another round of campaign this year, saying; "something that has never been done is now being done and you say it took us so long? Have anybody done this before? Have they announced Local Government elections that you are saying is because of the council polls that we are going around?,"

In his part, Ogor, who is believed to be the object of the anger in the area, said: "There are bound to be some disagreement in all situation of this nature, you can't run away from the reality of that. When you have 100 percent acceptability you know there's something wrong.

"But as good leaders saddled with the responsibility of moving Isoko forward, we would look at some of those voices and be able to meet them at their point of need because politics like I said before is all about resource sharing.Probably they are not satisfied with the level of distribution of resources."

Manager, while reacting said; "whatever we have done there is a token of appreciation. It doesn't represent any other thing apart from thank you".

The visit had earlier, kicked off from Ozoro to Ellu, Ofagbe, Okpe-Isoko, Otor-Iyede, Emevor, Otor-Owhe, Owhelogbo, Ozoro where the politicians were received by a tumultuous crowd of party women, youths and party faithful who danced and sang their praises.

Earlier, Macaulay who addressed the people at the various communities visited said they want a change in a situation where politicians are often known for meeting the electorate only when they needed their votes, saying "the basic of this visit is to appreciate our people, the people of Isoko North who inspite of all odds voted for PDP."

According to him. "You'll recall that during the rerun, somehow we narrowly missed this Local Government because certain persons were deceived and some of us felt we should move higher to play state and national politics and we left the home and things happened behind us. So we came back and the people believe in us and in less than three months, we returned them back to their root which is the PDP. So this is what formed the basis for this visit."

He said that the ruling party has done so much in terms of projects and empowerment programmes for the people, adding "you should know that we have only had one budget, this is the second budget and in all of those budget, there is no community that we have not sited a project."

Despite the ugly experience at Ekuigbe-Iyede, Manager said "this visit is very unique in the sense that we haven't done this before at the ward level."