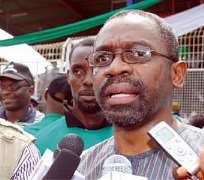 ABUJA, February 10, (THEWILL) - All may not be well with the House of Representatives as the Peoples Democratic Party (PDP) members in the House are on a collision course with their colleagues in the opposition over their "offensive" stand on the 2013 Appropriation Bill arising from the disagreement between the executive and legislature on signing the budget.

The PDP lawmakers have therefore warned their colleagues from the opposition parties not to politicise the refusal of President Goodluck Jonathan to assent to the budget as passed by both chambers as the leadership was meeting with the presidency to resolve the differences.

The opposition lawmakers led by the minority leader, Hon. Femi Gbajabiamila. had last Thursday threatened to begin mobilising lawmakers in the House to override the president's assent should he fail to sign the budget soon.

But operating under the platform of the Renaissance Group, the PDP lawmakers led by Kaka Kyari Gujbawu (PDP, Borno State), admonished the two chambers of the National Assembly to strike a favourable balance among the various interests currently delaying the passage of the Petroleum Industry Bill (PIB) and come up with an Act that best protect the overall economic interest of the country.

The group accused the opposition lawmakers of trying to distort the economic policy of the PDP-led Federal Government by seeking to negatively restructure the 2013 budget.

According to Gujbawu, "The only problem is that fundamentally, what the opposition want us to do, is to fundamentally alter the very foundation of the budget. That is going to lead to a very big structural problem; and that will not be acceptable. I do not think the 200 PDP members of the House will be hoodwinked by the antics of the opposition. We stand by our leadership because it is in the interest of Nigerians and we have the mandate to lead Nigeria to join the comity of developed nations."

He described the threat as a joke and an attempt to frustrate the economic policies of the Federal Government, pointing out that such moves would be totally destructive to the interests of members of the 360 federal constituencies that the House represents.

"The advice I want to give stakeholders in this budget issue, I mean both my colleagues in the National Assembly and the executive,is to let us put the country first. Let us take our selfish interests out of this. And by the time each and everyone of us, both from the executive and legislature decides that Nigeria comes first, I am sure we are going to fix this thing easier and earlier than we thought without rancour.

"To my colleagues in the National Assembly, I think we have done a wonderful job having to go through the budget as presented by the executive. Yes! The executive brought a budget proposal, we worked on it and made some amendments and sent it back to Mr. President. Mr. President also naturally caused his experts in government to advise him on the amendments and questions were raised about the budget and they sent the document back to us. I think it is a very healthy process for us to arrive at a perfect or near perfect document to fix our country.

"But I think we should not politicise this process which is the normal and healthy process in budget formulation anywhere in the world in any kind of democracy. My own quarrel is that some members of the opposition are trying to politicise an otherwise healthy process in any budget process all over the world. We should stand against that; we should condemn that without being equivocal about it," he said.

Speaking on the controversy that has trailed the petroleum industry bill, Gujbawu disclosed that a crucial meeting would hold this week between selected members of the Senate and House of Representatives with a view to sorting out grey areas in the bill where the two chambers differ.

He said that the provision of 10 per cent of the profits for Oil Producing Areas was an issue that had attracted so much criticisms to the Bill particularly in the Senate.

"I think there are machinery in place between interested members in the Senate and in the House to come together and find ways and means of making sure that this PIB which has been in the making for almost a decade becomes an Act during the life of this seventh National Assembly." Gujbawu stated.