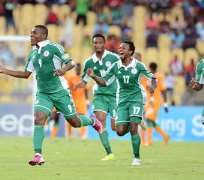 Head coach of the Nigerian national team, Stephen Keshi will not make a decision on the injured duo of Victor Moses and Emmanuel Emenike "until the last minute" ahead of Sunday’s 2013 Africa Cup of Nations final against Burkina Faso.

Both player picked up injuries during Nigeria’s 4-1 semifinal win against Mali on Wednesday and are now major doubts for the showpiece game against their West African rivals.

Keshi has now moved to clarify the situation about both players who have impressed with big performances in Nigeria’s first five games of the competition.

Moses however missed Nigeria’s opening game of the competition against Burkina Faso with an injury.

“I will wait till the last minute and by Sunday we will know whether the boys will play or not, any other opinion is unacceptable,” Keshi said on Saturday.

Reports in the media have been awash with varying stories about the situation of the two players and Keshi has now promised to let Nigerians know about the actual state of the duo at the appropriate time.

“I can understand the apprehension of the (Nigerian) public over the two players but we must be a little patient, because I know that the two of them want to play in the final and the medical team is working round the clock,” he concluded.

Sunday’s final at the FNB Stadium, Johannesburg kicks off from 7pm.