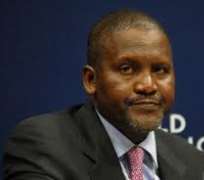 As part of his company's corporate social responsibility, Alhaji Aliko Dangote, President/Chief Executive of Dangote Group, has splashed the sum of N130 million on the Nigerian National Team, Super Eagles for reaching the finals of the ongoing 29th Africa Cup of Nations (AFCON) in South Africa. The national team, Super Eagles reached the finals of AFCON 2013 by thrashing the Malian national team 4-1.

A statement from Dangote Group explained that the gesture is part of Dangote CSR to promote and encourage sports development in Nigeria. The donation is to acknowledge the exploits of the national team at the AFCON and stimulate them to bring home the coveted trophy.

Sports minister Mallam Bolaji Abudllahi speaking on the donation said: “Dangote has always demonstrated commitment to Government and people of Nigeria. We are happy over the gesture shown to the players and the coaching crew. It is an example for other well-meaning Nigerians to follow.”

Football enthusiasts are commending Aliko Dangote on the gesture describing it as a necessary tonic that would inspire the Super Eagles to win the final match on Sunday February 10 against the Stallions of Burkina Faso.

Ephraim Ubong, a football lover and Super Eagles supporter believes that the donation would spur the national team to win the trophy. Ubong, a staff of a creative agency in Lagos charged other wealthy Nigerians andorganizations toemulate Dangote by donating cash and materials to the national team. The winner of the tournament will qualify for the 2013 FIFA Confederations Cup in Brazil as the representative from CAF