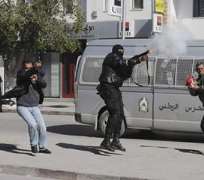 Tunisia's governing Islamists rejected on Thursday a plan by their party chief and prime minister to dismiss the government after the shooting of a leading critic, whose death sparked the biggest street protests since a revolution two years ago.

Prime Minister Hamdi Jebali of Ennahda announced late on Wednesday he would replace the government led by his moderate Islamist party with a non-partisan cabinet until elections could be held as soon as possible.

But a senior Ennahda official said Jebali had not consulted the party, suggesting the Islamist group was deeply divided over the move to replace the governing coalition and that could prolong the political crisis.

"The prime minister did not ask the opinion of his party," said Abdelhamid Jelassi, Ennahda's vice-president.

"We in Ennahda believe Tunisia needs a political government now. We will continue discussions with other parties about forming a coalition government," he said.

The North African state's main opposition parties also rejected any move to form a government of experts and demanded they be consulted before any new cabinet is formed.

Jebali announced he was dissolving the government on Wednesday after leading secular opposition politician Chokri Belaid was gunned down outside his home in Tunis, sending protesters onto the streets across the country.

A crowd in Tunis set fire to the headquarters of Ennahda, which won the most seats in legislative elections 16 months ago.

Although Belaid had only a modest political following, his sharp criticism of Ennahda policies spoke for many Tunisians who fear that religious radicals are stifling freedoms won in the first of the Arab Spring uprisings.

OPPOSITION CALL
The opposition Nida Touns, Republican, Popular Front and Massar parties demanded that Jebali - who planned to stay on as caretaker prime minister - talk to them before making any move to dissolve his cabinet.

"The situation has changed now ... Consultations with all parties are essential," said Maya Jribi, head of the secular Republican party.

"All the government, including the prime minister, should resign," added Beji Caid Essebsi, a former prime minister who heads the secular Nida Touns.

Political analyst Salem Labyed said the opposition appeared to want to leverage the crisis to its own advantage and that prolonged political uncertainty could kindle more unrest.

"It seems that the opposition wants to secure the maximum possible political gains ..., but the fear is that the country's crisis will deepen if things remain unclear at the political level.

"That could increase the anger of supporters of the secular opposition, which may go back to the streets again," he said.

World powers, nervous about the extent of radical Islamist influence and the volatility of the political impasse, urged Tunisians to reject violence and see through the shift to democracy.

But discontent has smoldered for some time not only over secularist-Islamist issues but also over the lack of progress towards better living standards after Ben Ali's exit.