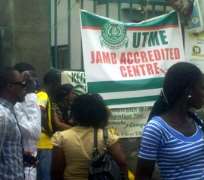 SAN FRANCISCO, February 05, (THEWILL) - The House of Representatives Tuesday urged the Federal government to suspend the planned conduct of direct computer-based test for the 2013 Unified Tertiary Matriculation Examinations (UTME) due for April 27.

The House also summoned the Minister of Education, Prof. Rukayyatu Rufa'i and the Registrar, Joint Admission and Matriculation Board (JAMB), Prof. Dibu Ojerinde, to appear before the House Committee on Education to explain the reason behind the policy somersault.

This resolution was taken after the adoption of a motion sponsored by Hon. Aliyu Madaki ( PDP-Kano) which was unanimously adopted without debate.

Presenting the motion, Madaki submitted that JAMB had fixed the year 2015 as the terminal date to end its paper and pencil based examination.

The lawmaker said in a twist, JAMB has resolved to adopt the computer based test method for the JAMB UTME 2013 slated for April 27.

Madaki noted that the UTME organised and conducted by JAMB has been characterised by controversies.

He argued that there was no adequate sensitisation and preparation for the policy to take off before the planned date of 2015.

"There was no clear cut modus operandi for the computer based test method because, JAMB itself lacked the competence and facilities to conduct the examinations," he said.

He said that the selection of the private firms was not advertised and no bidding was done as required by the Public Procurement Act.