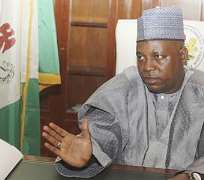 SAN FRANCISCO, January 31, (THEWILL) - The attempt by an international non-governmental organisation, International Advocacy for Peace Negotiation & Non-violence, to honour the Borno State governor, Alhaji Kashim Shetima, over his role in bringing about the recently-announced ceasefire by Boko Haram has been turned down.

Shettima, who turned down the award, Thursday, said in a statement issued by his spokesman, Isa Umar Gusau, that the award is better given later than now since the ceasefire is still a work in process.

He also said that the award should rather have been given to hundreds of those who have paid the supreme sacrifice during the crisis that has engulfed the state and parts of the North.

Shettima said the award is “hasty, biased, diversionary and extremely selective because so many people, key security chiefs, establishments and groups at the national and state levels are actually involved in whatever successes are gradually being achieved and these people and groups are still working day and night to achieve peace for Borno and Nigeria.”

It would be recalled that the governor had, on Wednesday, in a letter signed by one Mr. Russell Donvito, who is the Coordinator of the NGO, been nominated for a merit award over his success at achieving ceasefire via dialogue with the Boko Haram.

The letter read in part; ‘We remember you making that proposal to the media in April, 2011, as the governor of Borno State, being the centre of the insurgency. We have been closely monitoring your (Shettima) actions and statements about peaceful resolution, we have also confirmed from our local based partners how you have been committed and meeting different people including detained insurgents, courting and persuading them to give links for negotiations…

"We believe that negotiations must start from somewhere, you cannot have all armed guys to turn in overnight, you must start from someone however low or big so long as he is of that group. It is for these and much more, including your bold submission in Washington in 2011 before the US military, calling for dialogue with the Boko Haram when most other speakers couldn't say, that we think you should be singled out for honouring at no cost whatsoever, by the advocacy. "

He was supposed to be presented with the award in Brussels in March..

But in turning down the award, Shettima said the award recipients should be those who lost their lives to the violence, those who have become orphans and widows, those who have lost breadwinners and everyone that stood or continuously worked for the return of peace in Borno and rest of Nigeria’.