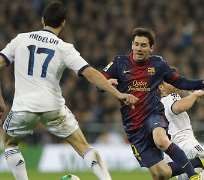 Cesc Fabregas struck what may prove a priceless away goal as holders Barcelona drew 1-1 at depleted arch rivals Real Madrid in an entertaining and closely-fought King's Cup semifinal first leg on Wednesday.

Lionel Messi sent Fabregas clear five minutes after halftime at an electric Bernabeu stadium enjoying the second "Clasico" of the season and he finished with ease past Real goalkeeper Diego Lopez.

Barca missed several clear chances to extend their lead before Real centre back Raphael Varane crowned a fine performance by leaping to head home an equaliser from a Mesut Ozil centre seven minutes from time.

Despite having a slight advantage for the second leg at the Nou Camp at the end of next month, Barca may live to regret not scoring more against a Real team missing regular keeper and captain Iker Casillas and Pepe through injury and the suspended Sergio Ramos.

The winners of the tie will play Atletico Madrid or Sevilla, who meet on Thursday at Atletico's Calderon stadium, in May's final.