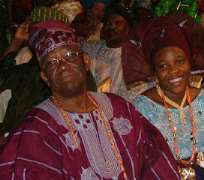 News is reaching Nollywoodgists.com that the highly successful business mogul, Chief Michael Adeojo's former secretary turned wife, Funmi has just delivered a set of twins in a London hospital a few days ago.

Top auto merchant, who runs Elizade Motors, Chief Adeojo, will be 75 in June, though before the arrival of the bundles of joy, we gathered he's going to throw a big bash to celebrate his 75 birthday, however, with the new development now, it's going to be double celebrations.

For those who don't know, Chief Adeojo is the father to the fashion designer of repute, Deola Sagoe who is doing well in the needles and thread business.