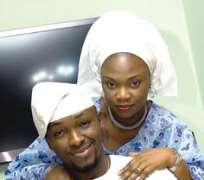 An upcoming musician, Gbemi Adetuberu, married to Ibadan society lady and interior decorator, Laide, has been booted out of the latter's apartment allegedly for physical assaults barely three weeks after their society wedding on November 8, 2012, at one of the Akure branches of RCCG. Mrs Olaide Adetuberu reportedly sent her husband, Mr. Gbemi Adetuberu, out of her apartment for allegedlly making the heat in the kitchen unbearable for her with his endless beatings.

It was alleged that Gbemi was seen 20 days after the N4m wedding, beating the living daylight out of his wife in Lagos during an event that had foreign guests in attendance. The interior decorator was said to have kept mum over the battery allegation but eventually did opened the Pandora box after getting the nod of her lawyer. The lady confirmed that she had been through hell in the hands of her husband.

Claiming that she had invested millions of naira in her husband's musical career since they started dating a year and a few months ago, Laide said Gbemi was not appreciative enough “to show some seriousness in his career” to justify her investment in his life. “He had always been interested in music, a passion that I passionately invested money in just to please him even though my parents wanted him to be a prophet. Because I wanted to support him, I paid almost N200,000 for him to participate at the NIMEX exhibition held at the Muson Centre, apart from other amounts spent on him”, she added.

At the exhibition on November 28, both had agreed that Laide would stay in the car outside the venue of the exhibition to get some rest as she had been exhausted by preparations for the event, and that Gbemi should join her in the car once he was done auditioning at the event. Gbemi was said to have been through in less than 30 minutes after he was called on stage, but didn't go to join his wife in the car as both had agreed. Worried, she looked for Gbemi and found him chatting with an usher.

They talked briefly but Laide said she could sense from her husband's countenance that he was getting worked up. Laide ignored Gbemi, who had shouted at her that they should leave the event and go home. “He didn't care whether we were at a public place, he continued to raise his voice at me”, she said.

Laide said she was ashamed as Gbemi continued to shout at her that she should leave Muson Centre start going home. She refused to do as she was instructed by her husband and his next action was to slap her. “I was stunned.

He just kept beating me right there in public and astonished guests couldn't do anything. It took the intervention of security officials before I could be rescued from him. He beat me blue black. I never expected he would beat me like that in public. I had expected that he would wait till we got home, he didn't. He has come to beg me, but I am afraid of losing my life because that is how he has been beating me from time.

Even my friends warned me not to marry him because each time he came to beg me after beating me, I always forgave him. But I'm now afraid for my life”. She said that her in-laws were aware of the ugly development, but that each time she reported Gbemi, his parents always waded in and Gbemi would always promise not to beat her again.

She also said she reported these beatings to some of her friends. “After the Lagos beating, I decided to send him out of my apartment because the suffering was getting too much for me. I reported to the police at Iyaganku in Ibadan, because he has started threatening me via e-mails since he can't come to my house. I have refused to take him back but I'm still afraid he may break into my house one day to injure me.”

However,the musician, Gbemi is yet to say his own side of the story.