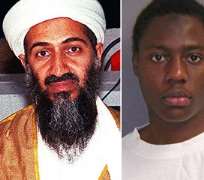 A tape said to be from al-Qaeda leader Osama Bin Laden has warned US President Barack Obama there will be more attacks if the US continues to support Israel.

In the newly released audio tape aired on al-Jazeera, Bin Laden says the US will never live in peace until there is "peace in Palestine".

The authenticity of the audio tape has not been verified.

The message claims al-Qaeda was behind the 25 December attempt to blow up a passenger plane bound for the US.

A Nigerian man, Umar Farouk Abdulmutallab, has been charged with attempting to blow up the Delta Airlines plane as it approached Detroit from Amsterdam.

'No safe life'
The voice recording says that the message is from "Osama to Obama".

Directly addressing Americans, it says: "It is unfair you enjoy a safe life while our brothers in Gaza suffer greatly... Our attacks will continue as long as you support Israel."

It goes on: "America will never dream of security unless we will have it in reality in Palestine."

The Washington-based IntelCenter, which monitors terror group communications, said the message was a possible indicator of an attack within the next 12 months.

'Hero' Abdulmutallab
In a reference to the plane plot, the message said: "If it was possible to carry our messages to you by words we wouldn't have carried them to you by planes."

It said: "The message sent to you with the attempt by the hero Nigerian Umar Farouk Abdulmutallab is a confirmation of our previous message conveyed by the heroes of September 11."

Umar Farouk Abdulmutallab allegedly tried to set off a bomb hidden in his underwear but it failed to explode. He said he had been trained by al-Qaeda in Yemen.

White House adviser David Axelrod said the US could not immediately confirm the authenticity of the tape.

"But assuming that it is him [Bin Laden], his message contains the same hollow justifications for the mass slaughter of innocents that we've heard before," Mr Axelrod told CNN.

The al-Qaeda in the Arabian peninsula group has already claimed it was behind the Christmas Day bombing.

The BBC's Kim Ghattas in Washington says the message may cast some light over the inner workings of al-Qaeda and its affiliates.

Some US intelligence officials said the tape was an attempt by the al-Qaeda leader to portray himself as in direct command of the organisation and all its offshoots.

Analysts have long debated whether bin Laden is really in control, our correspondents says.

Israeli foreign ministry spokesman Andy David told Associated Press news agency: "This is nothing new; he has said this before. Terrorists always look for absurd excuses for their despicable deeds."

UK Foreign Secretary David Miliband said he needed to study the message but pointed to the importance of the Detroit plot as "an attack on the West rather than an attack within the Middle East".

He added: "It obviously demonstrates both the dangers that exist, but also the links that can exist between different terrorist groups."

The al-Qaeda leader issues sporadic tape messages, the last being in September 2009 when President Obama was warned he was "powerless" to stop the wars in Iraq and Afghanistan.

The last purported Bin Laden video appeared in September 2007, when he referred to French President Nicolas Sarkozy and British Prime Minister Gordon Brown, who had both recently come to power.