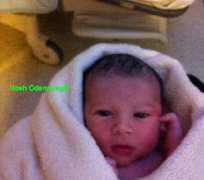 On Sunday, January 20, 2013, Nigerian football player, Osaze Odemwingie announced the arrival of his first son named Noah into his family. Since then, many have waited to see the picture of Osaze's child.

Now, the picture of baby Noah has hit the internet.

Osaze and his wife, Sarah Michael married in 2012. He was dropped by Stephen Keshi from the Nigerian squad in South Africa for the Nations Cup presently going on. I'll give $2,000 to anyone or group of persons who are in the possession of my missing digital camera---Kas

Segun Arinze Has the Sexiest Eyeballs in Nollywood

Why Oluwagbemisola Shotade, Miss Tourism United Nations won't have s*x for a year

My first introduction to sex was r*pe” – Foluke Daramola