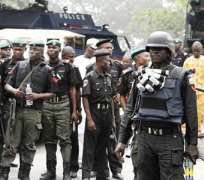 Forty eight hours after the attack on the convoy of the Emir of Kano, Alhaji Abdullahi Ado Bayero, security agencies in the state were still battling to unravel the mystery behind the broad day light attack that left about five people dead.

Contrary to claims credited to Kano state Deputy Governor, Engr. Abdullahi Ganduje that some suspects were arrested in connection to the attack on the Emir, both the state Commissioner of Police, Mr. Ibrahim K. Idris and spokesman of the Joint Task Force, Captain Ikedichi Iweha, denied knowledge of any arrest as at the time of filing this report.

Pointblanknews.com learnt from the security circles that they are not relying their theories only on terrorists' attack, as some traditional rulers and title holders believed to be eyeing the seat of the Emir are being interrogated.

Though the style used by the Emir's assailant was traditional to that of the dreaded Boko Haram Islamic terrorist group, security agencies are looking beyond that as they are swooping on every possible clues to get to the root of the latest attack on the Kano monarch described by many as grievous and barbaric.

Of much concern to security agencies were the fact that two favourite sons of the Emir, Sanusi and Nasiru who many believe are possible heirs apparent to the throne were badly injured during the attack.

They were both flown to the United Kingdom with the Emir where they are receiving treatment.

Pointblanknews.com can report that in the last four years, there has been silent bickering within the Kano emirate over the successor of 82-year old Emir Bayero who would be celebrating his 50 years anniversary on the throne this year.

The latest attack on the Emir has further heightened tension in the volatile city of kano where Islamic terrorists have been carrying out a series of silent and distant killings since January 20, 2011 when they wreaked the worst havoc on the ancient commercial city claiming the lives of over 300 people in a coordinated attack that spilled blood in agrarian land.

Emir Ado Bayero wept over that incident and openly condemned the perpetrators.

Meanwhile, but for the timely intervention of the Special Anti-bomb squad from the Kano state Police Command, hundreds of lives would have been lost in the ancient city as unidentified terrorists planted Improvised Explosive Devices (IEDs) near Guarantee Trust Bank, along Murtala Mohammed Way.

According to sources, the IED was neatly dropped by the road-side close to the bank where hundreds of people had come to transact their various businesses.

On sighting the black object, the JTF were immediately contacted and as such the anti-bomb squad of the Kano state Police Command responded.

The loud sound of the detonated explosive caused panic within the area as people ran helter-skelter when the JTF in a swift reaction cordoned off the area as motorist were being diverted, and within the shortest possible time, normalcy was restored in the area.