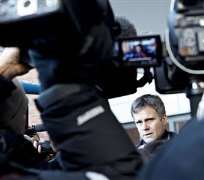 The hostage death toll from a four-day siege at an Algerian gas plant deep in the Sahara has risen to almost 60, with at least nine Japanese nationals also reported killed in an attack claimed by a veteran Islamist fighter on behalf of al Qaeda.

Algerian Prime Minister Abdelmalek Sellal is expected to give details at a Monday news conference about one of the worst international hostage crises in decades, which left American, British, French, Japanese, Norwegian and Romanian workers dead or missing.

A security source said on Sunday Algerian troops had found the bodies of 25 hostages, raising the total number of hostages killed to 48 and the total number of deaths to at least 80. He said six militants were captured alive and troops were still searching for others.

That number climbed further on Monday when a Japanese government source said the Algerian government had informed Tokyo that nine Japanese had been killed, the biggest toll so far among foreigners at the plant.

"We in al Qaeda announce this blessed operation," he said in a video, according to Sahara Media, a regional website. He said about 40 attackers participated in the raid, roughly matching the government's figures for fighters killed and captured.

The fighters swooped out of the desert and seized the base on Wednesday, capturing a plant that produces 10 percent of Algeria's natural gas exports, and residential barracks nearby.

They demanded an end to French air strikes against Islamist fighters in neighboring Mali that had begun five days earlier. However, U.S. and European officials doubt such a complex raid could have been organized quickly enough to have been conceived as a direct response to the French military intervention.

The siege turned bloody on Thursday when the Algerian army opened fire saying fighters were trying to escape with their prisoners. Survivors said Algerian forces blasted several trucks in a convoy carrying both hostages and their captors.

Nearly 700 Algerian workers and more than 100 foreigners escaped, mainly on Thursday when the fighters were driven from the residential barracks. Some captors remained holed up in the industrial complex until Saturday when they were overrun.

The bloodshed has strained Algeria's relations with its Western allies, some of whom have complained about being left in the dark while the decision to storm the compound was being taken. Nevertheless, Britain and France both defended the Algerian military action.

"It's easy to say that this or that should have been done. The Algerian authorities took a decision and the toll is very high but I am a bit bothered ... when the impression is given that the Algerians are open to question," said French Foreign Minister Laurent Fabius. "They had to deal with terrorists."

British Prime Minister David Cameron said in a televised statement: "Of course people will ask questions about the Algerian response to these events, but I would just say that the responsibility for these deaths lies squarely with the terrorists who launched this vicious and cowardly attack.

Algeria had given a preliminary death toll of 55 - 23 hostages and 32 militants - on Saturday and said it would rise as more bodies were found.

STAFF MISSING
The security source said that toll did not include the bodies of 25 hostages found on Sunday. The search was not over, and more could yet be found, he said.

Before Monday, the Japanese government and engineering firm JGC Corp, which had several dozen employees working at the plant, had said only that 10 Japanese were unaccounted for.

JGC is due to give an update regarding its staff in Algeria later on Monday.

Among other foreigners confirmed dead by their home countries were three Britons, one American and two Romanians. The missing include five Norwegians, three Britons and a British resident. The security source said at least one Frenchman was also among the dead.

Algeria is determined to press on with its energy industry. Oil Minister Youcef Yousfi visited the site and said physical damage was minor, state news service APS reported. The plant would start up again in two days, he said.

The Islamists' assault has tested Algeria's relations with the outside world and exposed the vulnerability of multinational oil operations in the Sahara.

Algeria, scarred by the civil war with Islamist insurgents in the 1990s which claimed 200,000 lives, insisted from the start of the crisis there would be no negotiation in the face of terrorism.