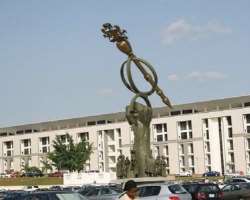 San Francisco Jan 18, (THEWILL) - Nigerian senators have continued to tow different paths over how to handle the current leadership gap in the nation.

The agitations from Nigerians and the civil society has put pressure on the senators to address the vacuum, which the president's absence has created. Their agitations has spurred some senators into action as they have started collating signatories to force the leadership of the Senate to debate the President's absence and compel him to transfer power to the Vice President, Mr. Goodluck Jonathan.

The Senate leadership maintained on Monday that it had no constitutional powers to force the President to hand over to the Vice President at least temporarily until he is fit to return to work.

THEWILL has not been able to independently verify reports that 60 senators have signed on to the move to force the Senate's hands on the matter. However our findings show that 73 signatories are required to force the motion on the Senate. However, an Assembly source did confirm that there is an advanced plot by some senators to drive a motion to get the reluctant Senate leadership to take a tougher stand on the President.

The source also said that some senators are irked that the country has not had a Commander-in-Chief in more than 50 days and are spoiling to fix the anomaly. Senate spokesman, Senator Ayogu Eze said on Monday that he was not aware of any moves by some senators to collate signatures to compel the President to hand over to the Vice President.

Senate President, Mr. David Mark told bewildered reporters on Monday at the Murtala Muhammed International Airport in Lagos that the President has not breached the constitution by his continued absence from the country. He said:

“There is no constitutional crisis yet on his absence from office. The civil service rule is quite different from the constitution and so far, the president has not breached any constitution with his absence.”

However, there are indications that both the Senate and House of Representatives may deliberate again on the state of the nation on Tuesday or Wednesday, but emphasis will be on the performance of the 2009 budget as Nigerians continue to call on the senators to address the vacuum created by the President's absence.

Meanwhile, Honourable Patrick Obahiagbon, a member of the House of Representatives representing Oredo Federal Constituency on Monday also added his voice to the call for Yar'Adua to obey the Constitution by formally notifying the National Assembly of his incapacitation. He said in a press conference that:

"I speak not against President Umaru Yar'Adua nor do I speak for Vice President Goodluck Jonathan. But I speak robustly for the stability of our polity. I speak on the side of constitutional democracy. I speak for the reclamation of our nation state from the hands of apostles of political gambadoism, and I speak against providing an opportunity and ready excuse for power adventurists and unbridled constitutional putschism.''

On whether his position is not different from his party's, he said, "We would have PDP and other political parties only when there is stable democracy. I have just spoken in support of constitutionality. The PDP constitution and the party itself must be subordinated to the clear position of the 1999 Constitution of the Federal Republic."

"Since no mortal has the responsibility for his health infrastructure, it would amount to a glaring and depreciable poverty of spiritual obesity for the president's state of health to attract public odium rather than compassion, and it is against this background therefore that as part of humanity, I deeply commiserate with Mr. President and his family, and do wish him a speedy recovery.”

“I am however bewildered that rather than Mr. President's compassionable ambience, or pitiable situation, reawakening in us a sense of national unity and cohesion, what we have seen is a situation where national centrifugal forces have been malodorously unleashed on the country. Undue overheating of the polity is being encouraged by a section of the political class who have chosen not to learn from history.”

"Otherwise, why would Mr. President or his gatekeepers not advise him to have recourse to Section 145 of the 1999 Constitution, which, if acted on, has the efficacy of conferring the status of an Acting President on the Vice President.

"Mr. President may not be in the proper state of mind to have averted himself to Section 145 when he sought medical attention in Saudi Arabia, but having, to the glory of God, been strong enough to sign the supplementary budget and talked to the BBC, is it out of place for Mr. President to muster the same energy in the implementation of Section 145 of the 1999 Constitution, and thus enabling his Vice President to function as Acting President?" he sought.

The leadership of the Peoples Democratic Party (PDP) and their counterparts in the National Assembly met over the weekend and agreed to give the Vice President all the support to keep the executive arm of government going.

The Senate is still expecting the Secretary to the Government of the Federation, Yayale Ahmed to brief it on the President's health next week.

There have been calls for the President to transfer power to the Vice president to enable him effectively function as acting President. A Federal High Court in Abuja is expected to give another ruling this week in a suit challenging the President's refusal to hand over.