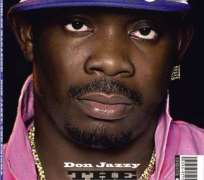 Many may have been wondering why at '30', as Don Jazzy reportedly claimed to be in terms of his age, would still be single with all the fame and fortune he has acquired. Not many may also know that Michael Ajere, his real name, doesn't like the popularly 'lepa' girls even though many guys love such babes.

You can belt that, according to Don Jazzy, "there is no way any lady shaped like a broom can attract my full attention." a heart break for those 'lepas' flocking around Don Jazzy hoping he would settle down with them soon?

In an interview with Punch, Don Baba J, as Wande Coal fondly calls him, stated his ideal kind of wife while dashing the hopes of the 'lepas' around him informing them to look elsewhere as he does not have any plan(s) for them.

"With due respect to slim ladies, there is no way any lady shaped like a broom can attract my full attention. I'm sorry but that's the truth. My ideal woman must be God-fearing. She must have all the basic curves in the right places. The rounder and bigger her chest and backside, the better," the multiple award-winning music producer and MAVIN Records boss described his 'future wife'.