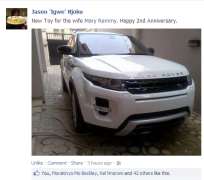 The man at the helm of affairs at iroko TV, Jason Njoku has bought a Range Rover Evogue for his actress wife, Remmy Mary. The couple got married in 2012 in Festac, Lagos, with some Nollywood stars in attendance.

Jason posted on his Facebook page with the written note 'new toy for my wife Mary Remmy. Happy 2nd anniversary.'

Mary is an ambassador of her husband's iroko TV platform. She was made its brand ambassador along with other top stars like Patience Ozokwo, John Okafor amongst others.