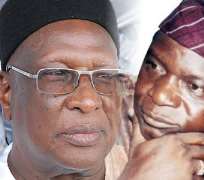 SAN FRANCISCO, January 14, (THEWILL) – The power tussle in the Peoples Democratic Party (PDP) between Chairman, Bamanga Turkur and National Secretary, Olagunsoye Oyinlola continued Monday with Turkur announcing a replacement for Oyinlola who on Friday filed an appeal and a stay of execution on a high court ruling that removed him from office.

The carefully worded statement did not make any reference to Oyinlola.

Barr. Onwe shall by this directive conduct all correspondences of the party, issue notices of meetings of the National Convention, the National Executive Committee, the National Caucus and the National Working Committee as stipulated in the Constitution of our great Party.

This directive takes immediate effect and is hereby communicated to all the levels and offices of the Party,” Turkur ordered in the release.