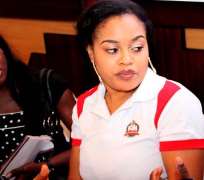 Few days after she was released from kidnappers den, Nollywood actress and Special Assistant on Public Affairs to Governor Rochas Okorocha of Imo State, Nkiru Sylvanus got married to her long time heartthrob secretly, yemoja can exclusively revealed.

The man who swept the actress feet is the media spokesman of Vice President Namadi Sambo, Mallam Umar Sani. Our sources revealed that the wedding which held two weeks ago was given a media blackout and attended by handful of family members.

Yemoja gathered that the wedding was made hush-hush because of the media attention that greeted the kidnapping of the actress and because the VP's media man has a wife already which will make Nkiru his second wife.

Nkiru Sylvanus was kidnapped by some gunmen in Owerri on Saturday, December 15, 2012 and demanded a ransom of 100 million naira for her release.

The actress was released about a week after, though there were unconfirmed reports that a ransom was paid.

One of the Vice President's Spokesman's friends confirmed the marriage and told yemojanews that, “it is not for public knowledge”.

We learnt Nkiru and Umar Sani had been dating for a while and it was Sani, who got the political appointment for the actress in Imo State.

“Umar Sani and Rochas Okorocha are close friends. Umar facilitated Nkiru's appointment in Imo State. You know Nkiru is from Abia State and not Imo”, our source declared.

The source further told us that it was Umar Sani that paid ransom of several millions of naira which made the kidnappers to release the actress.

Nollywoodgists.com called Nkiru to confirm this story but our calls to her were not picked. We sent a text message to her, which she neither confirm nor deny the story.