My Son Has Immortalized Me – King Prof. TJT Princewill 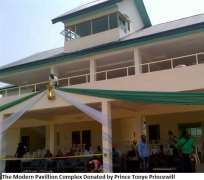 My Son Has Immortalized Me – King Prof. TJT Princewill

By Nwaorgu Faustinus
Following the commissioning and donation of a modern Pavilion Complex built by Prince Tonye Princewill to his father recently, King Prof TJT Princwill CFR, Amachree XI and Amanyanabo of Kalabari has described it as an act of immortalization bestowed on him by his son.

Commissioning the modern Pavilion Complex during the opening ceremony of the 2013 Annual Port Harcourt International Polo Tournament, the King pronounced the event as a legacy he would never forget. According to the King, “today, my son, Prince Tonye Princewill has immortalized me by this act. So far as this complex exists, my name will be attached to it”. King Princewill mesmerized the audience with his wisdom and mastery of the game of polo when he recalled with pride his polo playing days as a member of the Vom Polo Club in Jos in the 70s. He stated further, “How my son came about this initiative still stands as a mystery to me as I have never briefed him about this aspect of my life as he was so small when I played the game in the 70s. I feel fulfilled today as this event apart from reminding me of my days playing polo has made me a proud father.”

According to an online statement issued by Chief Chukwuemeka Eze, has that the King after commissioning the Pavilion Complex, declared open the 2013 Annual Port Harcourt International Polo Tournament involving clubs from Saudi Arabia, Dubai, South Africa, of course Nigeria and others.

In his remarks, Prince Tonye Princewill, who spoke through his legal adviser, Soalabo West Esq thanked the management of the Port Harcourt Polo Club for giving him the opportunity to donate this edifice. He challenged other great individuals from the State to assist in promoting sports as the State Government cannot do it alone. The pavilion complex is made up of a covered stand for important dignitaries to watch the Polo Game in Port Harcourt, modern media gadgets, an auditorium, offices, conveniences and a host of other world class facilities.

The President of the Club, Engr. Ibifiri Shehu Bob-Manuel who expressed sincere appreciation at the magnanimity of the Prince in donating the complex expressed his gratitude to him for the zeal and commitment in delivering the edifice in such a short period after making the pledge only last year. He added that the game of polo in the State has never had it so good since its inception in 1974 and that the club can now comfortably host international tournaments. He went on further to say that there were over 100 players participating in this championship with countries like South Africa, Saudi Arabia, Dubai and great Teams from all over the States in our country. He then added that by this we are also promoting tourism and attracting foreign investments to the State”.

The tournament goes on for a week with major prizes on offer for the best of the world class teams. Some of the elite cups being competed for in this tournament are the General T.Y. Danjuma Cup, the President's Cup, Governor's cup, Roland Cookey-Gam Cup and the Talevera Cup.

It is noteworthy that on 12th January, 2013, history was made in Port Harcourt, Rivers State of Nigeria when Port Harcourt Polo Club founded in 1974 by General T.Y. Danjuma was handed its first modern Pavilion Complex built and donated by Prince Tonye T.J.T Princewill.