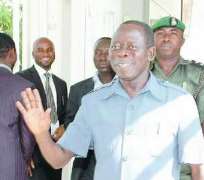 SAINT MUGAGA, THEWILL.ABUJA, January 12, (THEWILL) - There was jubilation, Friday, at the Edo State Government House in Benin as the Supreme Court set aside the judgment of the Court of Appeal Benin which ordered that a fresh tribunal be constituted to determine whether Edo State Governor, Comrade Adams Oshiomhole, possessed the qualifications for election as governor.

The court therefore upheld the arguments of Oshiomhole's counsel, Chief Wole Olanipekun, who had pleaded with the court to uphold the appeal.

Six other justices of the court also agreed with Justice Rhodes-Vivour.

The Election Appeal Tribunal had declined to consider the allegation that Oshiomhole did not possess the qualification to contest for governorship election.

However, the Supreme Court ordered both Oshiomhole and Airhiavbere back to the tribunal for determination of the allegation of irregularities.

It will be recalled that the Court of Appeal in Benin had upturned the tribunal's decision and ordered the parties to return back to a newly constituted tribunal for the determination of whether Oshiomhole had the basic qualifications or not.

The governor,who was not satisfied with the Appeal Court judgment, consequently appealed to the Supreme Court, where his lawyer,Olanipekun, argued that there was no basis for the judgment of the court of appeal.

Olanipekun averred that the petitioner grounded his petition on corrupt practice and non- compliance with the Electoral Act 2010, but not on Oshiomhole not having the required qualification.

He said that the Court of Appeal made a case for the respondent which the respondent did not make for himself as the petition only challenged results in five out of 18 Local Governments.

He said that PDP honourably withdrew from the petition because it was hopeless.

However, in his response, counsel to Airhiavbere, Chief Efe Akpofure, asked the court to dismiss the appeal and affirm the judgment of the lower court.

He said the tribunal did not say that there was no ground to sustain the allegation that Oshiomhole did not have the qualification to run for governor.

He maintained that non qualification was not made a separate ground was not a basis to hold that there was no ground in the pleadings to sustain the allegation that Oshiomhole was not qualified.

Akpofure called on the Supreme Court to read the whole petition as he argued that the tribunal found that the allegation of Oshiomhole's non-qualification was raised in the pleading but held that it was a pre -election matter.

In the appeal, Oshiomhole faulted the judgment of the Court of Appeal on six grounds as Olanipekun argued that the Court of Appeal erred in law when it held that the tribunal had jurisdiction to adjudicate on the alleged acts of non-qualification of the governor in the petitioner's pleadings.

Maintaining that the judgment of the Court of Appeal was based on sentiments and not law, he stated that there was no specific pleading in the petition challenging the governor's non-qualification to contest the Edo State Governorship Election.

Olanipekun further said that the issue raised by the petitioner regarding Oshiomhole's qualification to contest the election was a pre-election matter upon which the tribunal had no jurisdiction to adjudicate.

He said the Court of Appeal breached Oshiomhole's right to fair hearing when it held that the tribunal should have determined the petition against him on its merit.

"By the judgment of the lower court, Appellant (Oshiomhole) is being asked to go and defend allegations which have not been made against him.

In his petition, the PDP candidate had alleged that Oshiomhole was not eligible to contest the election as a result of his academic qualification, as provided for in the Electoral Act and the 1999 Constitution.

The PDP candidate also claimed that Oshiomhole only tendered a Modern School Leaving Certificate without a primary School certificate, which by the constitution did not qualify him to contest the election.

He said that the modern school certificate he (Oshiomhole) presented on oath to INEC had also been found to be ingenuine and fake.

The Court of Appeal Benin had last November set aside the decision by the Election Petitions Tribunal. The tribunal had declined to go into the issue of qualification on the ground that it was a pre-election matter. In a unanimous decision however, the Appeal Court dismissed a cross-appeal by Oshiomhole, describing it as mere “academic matter”. The court ordered that Airhiavbere’s petition should be referred to the lower tribunal for a fresh trial.

Chairman of the three-man panel, Justice Helen Ogunwumiju, in her lead judgement ruled that the Acting President of the Court of Appeal should reconstitute the tribunal to hear Airhiavbere’s petition, saying there were triable issues in his petition.

The court held that the tribunal was wrong to have held that it lacked jurisdiction to entertain the petition on the grounds that the issue of Oshiomhole’s qualification to contest the election raised by petitioner was a pre-election matter.

The court therefore ruled that , the tribunal, by the provision of Section 177 of the 1999 Constitution (as amended), has jurisdiction to entertain the petition.