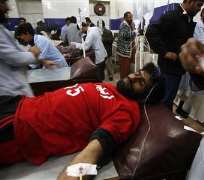 Violence against Pakistani Shia Muslims is rising and some communities are living in a state of siege, a human rights group said on Friday, warning that sectarian violence will only get worse a day after 114 people were killed in bombings.

Most of the deaths were caused by twin attacks in the western city of Quetta, near the Afghan border, the worst violence against Shias in decades.

"Last year was the bloodiest year for Shias in living memory," said Ali Dayan Hasan of Pakistan Human Rights Watch. "More than 400 were killed and if yesterday's attack is any indication, its just going to get worse."

Eighty-two 82 people were killed and 121 wounded in Quetta when a suicide bomber targeted a snooker club and a car bomb blew up nearby 10 minutes later. Nine police and 20 rescue workers were among those killed in the second blast.

The banned Sunni group Lashkar-e-Jangvi (LeJ) claimed responsibility for the attack in a predominantly Shi'ite neighborhood where the residents are ethnic Hazaras.

The bombings underscored the myriad threats Pakistani security forces face from homegrown Sunni extremist groups, the Taliban insurgency in the northwest and the less well-known Baloch insurgency in the southwest.

The LeJ wants to impose a Sunni theocracy in U.S.-allied Pakistan by stoking Sunni-Shi'ite violence. It bombs religious processions and shoots civilians in the type of attacks that pushed countries like Iraq close to civil war.

LeJ leader Malik Ishaq was released last year after spending 14 years in jail in connection with dozens of murder and terrorism cases.

The roughly 500,000-strong Shia Hazara community in Quetta are routinely hunted by extremist groups because their ethnically distinct features make them an easy target, said Dayan of Human Rights Watch.

"They live in a state of siege. Stepping out of the ghetto means risking death," said Dayan. "Everyone has failed them - the security services, the government, the judiciary."

The United Baloch Army claimed responsibility for that blast. The group is one of several fighting for independence for Balochistan, an arid, impoverished region with substantial gas, copper and gold reserves.

Quetta is the capital of Balochistan, a province that constitutes just under half of Pakistan's territory and is home to about 8 million of the country's population of 180 million.

In a separate attack in Mingora, the largest city in Swat valley, at least 21 people were killed when an explosion targeted a public gathering of residents who had come to listen to a religious leader.

No one claimed responsibility for that bombing. Swat has been under army rule since a military offensive expelled the Taliban in 2009.

The Taliban insurgency in the northwest has launched a string of attacks in recent weeks, including a suicide attack on Peshawar airport, the kidnap and execution of 21 paramilitary forces and a suicide attack killing a leading politician.

Sectarian attacks in Pakistan have risen even as overall deaths from militant violence have fallen over the past two years. But Pakistan's security forces and its overburdened justice system are still struggling to cope.

Human rights groups say the government must investigate whether some of the groups have links to elements within Pakistan's security services.

The LeJ has had historically close ties to elements in the Pakistani security forces, who see the group as an ally in any potential war with neighboring India.