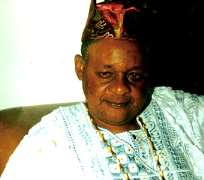 Rare artifacts and other works of arts were also destroyed by the fire which witnesses told THEWILL started at about 6.am and suspected to have been caused by a power surge.

No lives were however lost.