HOW FASHOLA STOLE OUR HEARTS 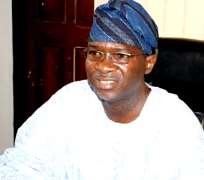 I must confess that the nearest I have seen the current governor of Lagos State Mr. Babatunde Fashola, a Senior Advocate of Nigeria was about two years ago at the Supreme Court of Nigeria’s complex in Abuja when he witnessed the swearing in of some newly elevated lawyers to the title of Senior Advocate of Nigeria. We only exchanged very distant gestures of greetings which began with my telling him good morning sir and he in turn responded thank you.

I have also in the last couple of years written several articles but only commented about Lagos issues only about thrice the last of which was my strong condemnation of the Lagos State governor for reportedly sacking hundreds of medical doctors under the Lagos State civil service for daring to proceed on strike to press home demands for enhanced pay packages and better working environment.

In that article, I castigated governor Fashola for been insensitive by ordering the mass sack of striking doctors even as he air lifted his father who was reportedly ill to take the best medical treatment abroad.

From the above, readers will appreciate the fact that this is not a paid write up even if the title may sound patronizing.

Governor Fashola did something in late December 2012 which gave rise to the title of this piece in which I am now narrating how he stole our hearts.

The Lagos State governor ended last year on agood note as one public office holder who understands that power is nothing if the suffering of a citizen in need can not be ameliorated even when we have the resources to achieve the resolution of such distress situation.

The act of charity that was done by the Lagos state governor was his timely intervention in donating N4.5 million to the ailing ace Nollywood Actress Miss. Ngozi Nwosu who is critically facing health challenge of kidney related issues. Ngozi Nwosu, the talented amazon who has featured prominently in several home movies and television soap operas has being bed -ridden with kidney related ailments for some months and has frantically searched for N6 million to enable her undergo foreign medical treatment and she could only raise N2.5 million.

The timely intervention of Governor Fashola with the much needed cash donation was one killer punch that has engraved his name in the footprints of time as one kind public office holder who is ready to wipe away the tears of the distressed members of the society.

Tu Face Idibia, the reputable talented musician who has won several laurels for his beautiful songs has once released a song in which he rightly enthused that _“power is nothing if the people’s suffering is not solved…” _

Few hours after we ended our Christmas Mass at the Saint Joseph Catholic Church, Uwakonye-Aniche, Aro-Umuduru Autonomous community of Arondizuogu in Onuimo local government council of Imo state, I received a news alert on my facebook wall that Ngozi Nwosu was critically ill and that she was practically begging the Nigerian elite to come to her assistance because she does not want to join the growing list of actors and actresses in Nigeria that have passed on to the great world beyond due to pathetic health challenges which they could not resolve for lack of financial resources.

At this point, my mind went straight to the philosophical story written by Sam Anokam for Daily Sun in which he stated the obvious that “Angel of death has visited Nollywood”.

It was from the beautifully written story of Daily Sun of December 8th 2012 that I learnt that at the last count about 10 actors and actresses, both popular and obscure (to quote Sam Anokam) have passed on to the great world beyond. Just before the year 2012 ended and approximately three weeks after the above story was written the number of actors and actresses that died in 2012 increased to eleven with the passage at the University of Ibadan Teaching hospital of the popular Yoruba Actress Miss Bisi Komolafe. She reportedly died from complications associated with pregnancy even though no confirmation has emanated from the hospital on her precise cause of death.

In what could pass as the litany of woes that befell the film industry in Nigeria, the media has reported that the following Actors/Actresses have died in 2012. They are; David Ihezie; he was a veteran actor, who died in his Enugu base after a short battle with Arthritis on January 19. He was in his 70s; Brown Atienwen; popular Benin-based seasoned Nollywood actor and staff of the Edo State’s Ministry of Arts, Culture Tourism, died at the University of Benin Teaching Hospital (UBTH).

He was unable to pay the sum of N150, 000 for a major operation. The cause of his illness was unknown. He died in October.

I am told that Governor dams Oshiomole of Edo State was so enraged at the news that the Permanent Secretary in the ministry of Culture could not raise the money to save this Benin based talented actor who died because he couldnt raise a pittance of N150,000. The Governor compulsorily retired the indicted permanent secretary.

Other Nigerian talenred actors and actresses that died from seemingly surmountable health challenges in 2012 are Mr. Pete Eneh; who died, according to media reports, after suffering from protracted illness, which culminated in the amputation of his leg. The actor, who was diabetic, sustained some kind of injury last year, which degenerated to a sore and refused to heal. He spent three months at the hospital before he was advised to amputate the leg to avoid the infection spreading to other parts of his body. The amputation took place on Wednesday, October 24, after all efforts to save the leg was unsuccessful.

Enebeli Elebuwa; died in an Indian hospital in New Delhi. He had spent two years bed ridden and unable to raise the needed finance to proceed to take good medical treatment abroad since the health sector in Nigeria is in shambles. Ironically, this profoundly gifted actor Elebuwa was behind a popular advertisement in which the Federal ministry of culture and information was advising Nigerians some years back not to travel enmasse abroad in search of greener pastures [Andrew please don't check out].

It was reported that Mr. Enebeli Elebuwa's health deteriorated when he couldn’t afford to receive medical attention. It was also gathered that the stroke came as a result of uncontrolled hypertension and diabetes mellitus, which also affected his brain.

The shocking news of the serious health challenge facing Miss Ngozi Nwosu came at a time when those of us holidaying in the South East and especially in Imo State were bombarded with the unfortunate news that Governor Rochas Okorocha was in confrontation over right of way with the Senator representing Owerri Mrs. Chris Anyanwu.

We were about figuring out how this needless public show of shame between governor Okorocha and Senator Anyanwu could be settled when the cheering news was again received that the Lagos State governor Babatunde Fashola has donated N4.5 million to Miss Ngozi Nwosu to enable her take the best medical treatment abroad.

Most of us who were in the South East for the Christmas break then heaved a sigh of relief that at last we have a cheering news to take our attention away from the quarrelsome duo of governor Okorocha and his party member, the APGA produced Senator Chris Anyanwu.

Looking at the entire scenario from a larger picture of the donation of this life saving cash to the ailing Actress Miss. Nwosu by Fashola, a lesson to be learnt is that for once, politicians in Nigeria now have a good example of the Kind of Charity and humanitarian activity that they can emulate.

Clinton appropriately titled that book as _“Giving: How Each of us can change the World”, _and in this book written in simple grammatical expressions and language, the former American President who is now an Iconic figure around the World challenged the elite around the world to make doing work of charity as their first nature.

Clinton wrote thus; _“Like many people who are fortunate to live full, rewarding lives, I reached a point in my journey where, apart from taking care of my family and being with them and my friends, what I cared most about was doing what I could to make sure people younger than me don’t die before their time and aren’t denied the chance to find their own fulfillment. After I narrowly escaped what could have been a fatal heart attack in 2004, I felt that way even more strongly”._

Bill Clinton’s wife Mrs. Hilary is another human being that God endowed with a heart of Gold because she has lived and continues to live a life of humanitarian services to the less privileged.

In the book by President Clinton titled _“Giving: How each of us can change the World”,_ he offered reasons why each of us should extend our good hearts of human kindness to the needy.

He wrote thus; “Because we live in an interdependent World, we cannot escape each other’s problems. We are all vulnerable to terror, weapons of mass destruction, the spread of disease, and the potentially calamitous effects of climate change. The fact that one in four people who die this year will succumb to AIDS, tuberculosis, malaria, or infections related to dirty water casts a pall over all our children’s future”.

The singular good act of charity done in late December 2012 by governor Fashola in the form of giving N4.5 million to Miss. Ngozi Nwosu has endeared him to the hearts of millions of Nigerians.

Two things easily come up for cross examination from the sickness of Miss Nwosu which can only be treated abroad for which she does not have the resources even with her longstanding services to the Nollywood film industry.

The two issues are the need for Nigeria’s health sector to be fundamentally transformed so that distressed Nigerians can get solution to their health challenges locally at affordable cost. The second issue is the need to pay commensurate wages to talented actors/Actresses and for them to invest their resources for the rainy days.

A situation whereby some of our best Actors/Actresses are paid pittance for their beautiful work should be condemned and the Regulatory authorities must wake up to enforce legal frameworks to protect the copyrights of these rare talents because it is only in Nigeria that such profoundly endowed actresses/Actors are neglected up to a point of destitution.