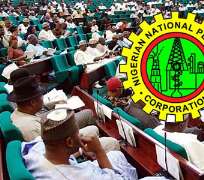 Senate spokesman, Senator Enyinnaya Abaribe, who was responding to inquiries on the matter, maintained that the National Assembly did not approve the NNPC loan.

"Under the law, no government agency can borrow money without the approval of the National Assembly.

"We have to know if that was done first, but then the question to ask under the circumstance is; what happened to the N161billion supplementary appropriation that was approved by the National Assembly for government to take care of the shortfall in the fuel subsidy budget, particularly to ensure steady supply of petroleum product during the yuletide,”he said.

Also reacting to the development, Chairman Senate Committee on Petroleum (Downstream), Senator Magnus Abe, said there was no record to show that approval was given to NNPC to borrow the money.

"As at this afternoon, there's no record of the loan deal before us. We are still trying to confirm the loan from NNPC.

"The committee read about the loan deal on the pages of newspapers like other Nigerians and we have had concerned Nigerians calling to ask whether the National Assembly approved the loan.

We have no record of such before us," he said.