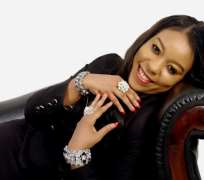 Delectable woman of woman of many parts, the last child and only daughter of late frontline Second Republic politician and medical practitioner, and Minister of Health, Dr. J.O.J Okezie, popularly called Queen Ure Okezie is in the news again. This time around, it's not about her relationship with Pastor Kris but how she totally ignored her former beau, Emmanuel Ifechukwu Okose, a.k.a. Soul E at a recent launch of her much anticipated album, Porpori.

Okezie totally omitted her former husband, Soul E, from her citation and failed to give him any recognition. According to the citation, Okezie graduated from the University of Jos with a B.SC in Physics, she has worked in five commercial banks and one mortgage bank, she is a personal coach and trainer, she has established a church, a foundation and many more. But the reading had no mention of Ure's marriage to Soul E, which packed up less than a year after it was contracted.

Towards the end of the programme, Okezie insisted on singing a gospel song before the main Porpori number, saying, “Una no know why I be pastor? I carry anointing, una no know?” Meanwhile, Ure's church, 'Love Villa' which she is co-pastor with her ex-husband has been closed down as she launches into full-time music.