N29B Corruption Allegations Against Me Are Cheap Blackmail, Says Orubebe 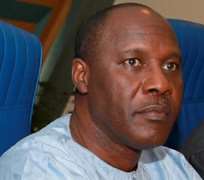 SAN FRANCISCO, January 05, (THEWILL) - The Minister of Niger Delta Affairs, Elder Godsday Orubebe, has described the N29 billion corruption allegations leveled against him by a former member of the House of Representatives, Hon. Dino Melaye, and his group, Anti-corruption Network, as cheap blackmail, saying the allegations were false and unfounded.

Describing the furore generated by the allegations as an apparent ignorance of the workings of government, Orubebe said the allegations smack of political vindictiveness ahead of the 2015 general elections.

He noted that as a minister, he does not have the authority to approve major contracts, saying such procurements are statutorily deliberated upon and approved by the Federal Executive Council (FEC).

While maintaining his innocence over the allegations, he said details on his law suit against Melaye and his group will soon emerge. He also urged Nigerians to be patient with the President Goodluck Jonathan’s administration, saying the transformation agenda was on course.

It would be recalled that Melaye and his Anti-corruption Network had taken Orubebe to the cleaners over his alleged involvement in contract inflation of N29bn, acquisition of properties and illegal involvement in the award of a contract for the construction of a skills acquisition centre in Edo state.

But explaining the procedure for the contract award, Orubebe said, “It is very sad that people who are able to serve this country are being maligned anyhow. On this issue of Edo State skills acquisition centre, generally for any contract to be awarded by any ministry it must go through due process.

"Edo skills centre was one of the nine skills centres that were all awarded at the same time. In each of the skill centres, the contracts was awarded to three different contractors.

“Like other skill centres, I visited the Edo skill centre five times and I saw that the contractors were not performing. We wrote letters to them expressing our disappointment. As at the time we were speaking, most others had gone about 80 percent but they were still at no more than 10 percent with no improvement.

"So we followed due process; we wrote to BPP to examine everything and the contracts were terminated. We then started a new process.

"So the issue of inflating contracts does not arise. You cannot inflate those contracts, it is not possible. Before any contract is awarded, it must go through due process which will certify it along lines of the cost implication. It is due process that will award a certificate that the contract must be awarded at a particular cost. And that is when you can send it to the Federal Executive Council, if it is over one billion naira.

“There, all the ministers will examine it and approve it. So, no minister has the power to sit down in his office and say I am increasing the contract sum to any amount. It is not possible going by the Procurement Act,” Orubebe explained.

According to the minister, "Unfortunately some of the people raising this allegation are former honourable members who have not read the laws that they made. If you want to award any contract, your engineers will go through the contract and then send it to BPP.

"They are the people that will tell you that you must award it at a certain cost. So, these people who don’t know anything about contract award are going about telling people lies. So, that story is nowhere. It is false; it is orchestrated to tarnish the image of the ministry. We reject it, it is not done anywhere."

Orubebe stated further that Melaye and his group had gone to town to say that he awarded contract of N29bn and have paid all the money to the contractors.

“In fact, they specifically said I inflated one of the contracts from N1billion to N12billion. For goodness sake, no minister can inflate contract sum by even one percent. It is not possible. Again, the three contracts the so-called anti corruption network talked about were for only N6billion. And even out of the N6billion, we were only able to mobilise the contractor with about N909million.

“ Today, as we speak, the three contractors now have pending certificate on what they have done to the tune of over N1billion.

"As of that time I addressed a press conference and took the media to visit the sites because they alleged that neither the projects nor the communities were in existence. The media went there and saw these things for themselves and they said Dino Melaye lied,” Orubebe explained.

The minister also dismissed the allegation that he acquired some landed properties.

“He (Melaye) went on to say that Setraco built a house for me and that the Certificate of Occupancy of that house is in my name. I called the media and they came. I contacted the man who owns the house and the process leading to how I got to rent the house. All the papers were brought; the C of O and plan of the house as approved by the Federal Capital Territory (FCT) Administration had nothing to do with me.

“We owe one of the contractors N20billion. So tell me, if we owe them that amount which we cannot pay from the budget, how would somebody you owe come and build house for you? It does not make any moral sense. When my friends published the documents and everything about the house, the next thing they said was that Orubebe has so many properties.

"I came into government in 2006. Every minister and Nigerian is entitled to apply officially and legitimately for a land for development. I applied in my name and I got land. Some of them I have not seen them with my eyes because they are in bush areas and none of those plots of land has been developed because I don’t have money to do so. And somebody will go and deceive Nigerians that I have properties that I have not disclosed to people. Lands in the bush that I applied officially paid the expected government money and then I was allocated. So tell me in which area Orubebe done any fraudulent thing,” he said.

Orubebe said the entire allegations were pointers to the desperation of some people over the 2015 general elections.

“I think, generally, some people are not comfortable with some of us because we speak the truth at all times and I will stand for the truth. Anywhere we are, we say things as it should be.

Remember, I was deputy director-general of the Goodluck/Sambo Campaign Organisation and we talked about transformation and these are some of the things that we do. If you come to the Ministry of Niger-Delta, I don’t discuss with contractors.

“ I don’t even know some contractors. I deal with files and I don’t allow any files stay on my table for more than two days. And that is a policy in the Ministry of Niger-Delta, I don’t see contractors, I don’t discuss with them. It is possible this is not going down well with some people and of course we are moving closer to 2015 and some people think they have to deal with some of us.

“So, I perceive strongly that there is serious political undertone at the national level and the state where I come from. That is how I see it. I make bold to say that I have not done anything wrong. So for people to come in this form to attack, it means they have some political desire, ” he said.