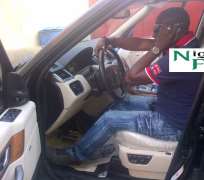 Akpako Master, despite many controversies trailing him has just shut up the mouths of his enemies with a new year gift. The songbird just took delivery of a new Range Rover Sport.

Terry G, who's happy about the new development in his life, is full of praises to God for the new addition to his fleet of cars.

The brand new black RANG ROVER SPORT, he calls 'SMALL CARTON' as a new year present to himself.

Too much money In the 'House Of Ginjah' you would say.

One of his aides said "we really thank God for this wonder boy from the street to limelight, hard work truly pays! VIDEO: "Genevieve And I, No Smoke Without Fire"- D'banj Finally Confessed!