AS WE APPROACH 2015 GENERAL ELECTION 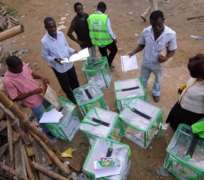 “… The great task of building a nation is never done! Here in America, more than two centuries since our independence, we are still working to perfect our union”—President Barrack Obama

There is no doubt that one the fundamental challenges facing us as a nation is leadership! Wherether it is in the struggle by some politicians to acquire power without responsilities or the wonton acts of corruption, lack of commitment and trust, jiggerypokery, ethnicity, religious bigotry, regionalism and irrational sentiments that have stymied our democratic journey and institutions for years, to the violence and malpractices that have characterized our elections since

If our politicians had observed all the INEC’s code of conducts to the latter, and not those who preach democracy and rule of law in public spheres, but, in secrets, their conducts contradicts what they preach, circumstances that lead to the death of about 520 persons and the destruction of properties and sacred centers that accompanied the conduct of the 2011 general elections would not have occurred in the first place!

However, the successful conduct of any election requires collaborative and co-operative efforts of all citizens, including the government, political parties, INEC, security officials, tribunals electorates and the civil society organizations. As a leader of a group that played active role in the last general elections in the country, I observed that voters education and mobilization done for the elections did not produced satisfactory results. Also, in some polling stations, total number of votes cast exceeded the number of accredited voters and crowed control was not properly done.

In a nation where there are 63 political parties before the 2011 general elections only 9 parties had representatives in the National Assembly, there are; Peoples Democratic Party (PDP), Action Congress of Nigeria (ACN), Congress for Progressive Change (CPC), All Nigerian Peoples Party (ANPP), Labour Party (LP), All Progressive Grand Alliance (APGA), Democratic People’s Party (DPP), Accord Party (AP), and People Party of Nigeria (PPN). If the remaining political parties had transformed themselves in to civil society organizations, instead of answering political parties without political presence, the issue of voters apathy, lack of adequate voters education and mobilization encountered in the 2011 elections would have taken care of its self.

0.02 percent.
Judging from all the standards, the conduct of the 2011 general elections in Nigeria was far better and appreciable than the 2003 and 2007 general elections, both from the pre-election, proper election and post elections. Example, the type of drama that took place in 2007 was absent in the last election. In 2007, while the presidential election was slated for April 21, 2007, the Supreme Court on April 16, 2007, ordered that, INEC should include the name of a presidential candidate who according to its ruling said he was wrongly disqualified from participating in the election. In 2007, ballot boxes and papers plus election officials were never sighted in some polling stations especially in rural areas.

Meanwhile, in planning for the conduct of the 2015 and future elections in the country, the circumstances that led to cancellation of the National Assembly Elections earlier slated for April 2nd, 2011, should be avoided, because that did not only affects the purse of some political parties who have prepared adequately for the polls by way of the payments it made to party agents and other logistical arrangements made by parties, but it also affected the INEC its self. According to reports, the electoral body lost about N3.8 billion in the assumed payments of N35, 000 each it made to the Returning Officers in the 109 Senatorial Districts in the country. The payment of N30, 000 made to each of the Returning Officers in the 360 Federal Constituencies of the Federation.

Payments of N25, 000 made to about 8,812 Ward Collation Officers. Payments of about N9,000 made to each of the Presiding Officers in the 120,000 P0lling stations and finally, the payment of N9,000 made to each of the about 240,000 Assistant Presiding Officers in the aborted National Assembly Elections in 2011. Also, there were reported cases of some politicians and some INEC staff tampering with the Computerized Voters Register (CVR).

Nonetheless, INEC has every right to make the 2015 general elections the best, even better than the June 12, 1993 Presidential Election by starting preparations early enough. As parts of the preparations for successful 2015 general elections, INEC should introduce mechanisms aimed at monitoring campaign expenses by candidates. Voters education should be a continuous process, until every Nigerian becomes familiar and very conscious of his or her political rights and responsibilities. Politicians should play by the rules, by maintaining high level of integrity, honesty, decorum, selflessness and patriotism. They should desist from politics of war, hatreds, anarchy, and places of origin, rancor and acrimony. The media should avoid circumstances that led to the sanctioning of about 26 broadcast stations by the National Broadcasting Commission (NBC) in the last election. The media should observe the ethics of journalism which includes; balance, accuracy, fairness and impartiality. The security personnel should be above boards; they should guarantee the security of voters, INEC officials, polling agents, election observers and other players in the electoral matters. The civil societies should be pro-active; they should not only wait for election times to rush out and start endorsing candidates, but, they should be raising political awareness, until every citizen, whether literate or not literate becomes attuned to our electoral system, so that it would no longer be between their elections and our elections, but Nigerian election!

The young people should rise up and defend of our democracy and engage in active promotion of rule of law until our democratic institutions become stronger than individuals, because according to President Obama: “We need young Africans who are standing up and making things happen not only in their own countries, but around the world” . Therefore, “While today’s challenges may lack some of the drama of the 20th century liberation struggles, there ultimately may be even more meaningful, for it will be up to you, young people full of talents and imaginations to build the Africa for the next 50 years”