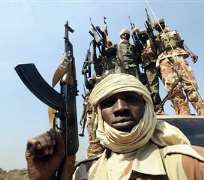 Rebels in Central African Republic said they had halted their advance on the capital on Wednesday and agreed to start peace talks, averting a clash with regionally backed troops.

The Seleka rebels had pushed to within striking distance of Bangui after a three-week onslaught and threatened to oust President Francois Bozize, accusing him of reneging on a previous peace deal and cracking down on dissidents.

Their announcement on Wednesday gave the leader only a limited reprieve as the fighters told Reuters they might insist on his removal in the negotiations.

"I have asked our forces not to move their positions starting today because we want to enter talks in (Gabon's capital) Libreville for a political solution," said Seleka spokesman Eric Massi, speaking by telephone from Paris.

"I am in discussion with our partners to come up with proposals to end the crisis, but one solution could be a political transition that excludes Bozize," he said.

Bozize on Wednesday sacked his Army Chief of Staff and took over the defense minister's role from his son, Jean Francis Bozize, according to a decree read on national radio, a day after publicly criticizing the military for failing to repel the rebels.

The advance by Seleka, an alliance of mostly northeastern rebel groups, was the latest in a series of revolts in a country at the heart of one of Africa's most turbulent regions - and the most serious since the Chad-backed insurgency that swept Bozize to power in 2003.

Diplomatic sources have said talks organized by central African regional bloc ECCAS could start on January 10. The United States, the European Union and France have called on both sides to negotiate and spare civilians.

Central African Republic is one of the least developed countries in the world despite its deposits of gold, diamonds and other minerals. French nuclear energy group Areva mines the country's Bakouma uranium deposit - France's biggest commercial interest in its former colony.

RELIEF IN BANGUI
News of the rebel halt eased tension in Bangui, where residents had been stockpiling food and water and staying indoors after dark.

"They say they are no longer going to attack Bangui, and that's great news for us," said Jaqueline Loza in the crumbling riverside city.

ECCAS members Chad, Congo Republic, Gabon and Cameroon have sent hundreds of soldiers to reinforce CAR's army after a string of rebel victories since early December.

Gabonese General Jean Felix Akaga, commander of the regional force, said his troops were defending the town of Damara, 75 km (45 miles) north of Bangui and close to the rebel front.

"Damara is a red line not to be crossed ... Damara is in our control and Bangui is secure," he told Reuters. "If the rebellion decides to approach Damara, they know they will encounter a force that will react."

Soldiers armed with Kalashnikovs, rocket propelled grenade launchers and truck-mounted machineguns had taken up positions across the town, which was otherwise nearly-abandoned.

Some of the fighters wore turbans that covered their faces and had charms strung around their necks and arms meant to protect them against enemy bullets.

Chad's President Idriss Deby, one of Bozize's closest allies, had warned the rebels the regional force would confront them if they approached the town.

Chad provided training and equipment to the rebellion that brought Bozize to power by ousting then-president Ange Felix Patasse, who Chad accused of supporting Chadian dissidents.

Chad is also keen to keep a lid on instability in the territory close to its main oil export pipeline and has stepped in to defend Bozize against insurgents in the past.

"The rebels are now in a position of weakness," the minister said, asking not to be named. "They should therefore stop imposing conditions like the departure of the president."

Central African Republic is one of a number of countries in the region where U.S. Special Forces are helping local soldiers track down the Lord's Resistance Army, a rebel group which has killed thousands of civilians across four nations.

France has a 600-strong force in CAR to defend about 1,200 of its citizens who live there.

Paris used air strikes to defend Bozize against a rebellion in 2006. But French President Francois Hollande turned down a request for more help, saying the days of intervening in other countries' affairs were over.