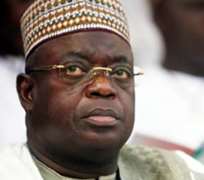 It is obvious that the present level of security challenge fast eating the very core of Nigeria’s unity caused by systemic corruption and volatile outburst of the people will quake the center and soon things will begin to fall apart. Now social, economic and political falling apart is being witnessed in the country but it is the physical destruction of the Nigerian state that we as a nation are sadly headed to. The urgent need for a leader with the capacity both in intelligence and command of personalities is required.

The endless roll call of distinguished personalities that graced the twin wedding celebration of the Governor of Niger state, Dr. Muazu Babangida Aliyu in Minna with more than 10 serving governors, several deputies, several former governors, ministers past and present, traditional rulers from all parts of Nigeria, technocrats and religious leaders.

The number 2,3 and 4 highest ranking Nigerians were also present at the occasion, leaving only the president out of the roll call. Like the American arrangement probably adopted by Nigerian government, the president and his vice cannot be at a function at same time for nation security reasons.

The presence of Maitama Sule, Shehu Shagari, IBB, General Abdulsalami and the host of other important national figures including royal fathers at the occasion are unequivocal signs of endorsement for the Chief Servant by key Northern elder statesmen as a unity symbol fit only for a rescue mission at the presidency in 2015.

Penetrating the thoughts of Governor Rochas Okorocha of Imo state who submitted on that wedding occasion that Dr Aliyu is capable of unifying Nigeria, one would say he has spoken the minds of millions of Nigerians and indeed moved a public motion towards salvaging the collapsing country.

In the mind-eye of Rochas, a man who has such latitude of friendship cutting across virtually all divides will indeed managed successfully social, political and security challenges bedeviling the country. What appears to be very elusive in the present administration of Goodluck Ebele Jonathan would be measurably achieved under the leadership of an affable personality.

With the distinguished categories of personalities who stormed Niger state on that fateful Saturday, there is hardly any national matter of importance that cannot be addressed. The present problem of unity, trust and leadership of the Peoples Democratic Party (PDP) could be effectively discussed with the presence of its prominent national figures and governors. The challenges of security could be perfectly handled with the presence of emirs and religious leaders and issue of moving the entire nation forward economically could be handled by seasoned technocrats all present at the occasion.

Some people may just dismiss the crowd as mere assembly of friends, yes that’s true and its from such true friendship effective communication can be achieved. Nigerians are tired of cosmetic relationships. Such relationships have plunged the country into deeper level of corruption, unending pillage, vicious circle of patronage and revolving chair of systemic rot just to keep the pseudo friends.

Indeed the blunt disposition of the Chief Servant on national matters, his articulated administrative policies and consistency in managing resources for the good of Niger state and zero tolerance for corruption has endeared him to elites cutting across all divides, all interests and all beliefs.

The caliber of elites we need in the next general election should imbibe the concept of servant leadership. They must contest to win, to serve as Chief Servants and exit as heroes (true excellences). Nigerians have indeed learnt from elites who are only interested to contest and win elections, steal seamlessly and exit as common thieves. These class of criminals settle for plea-bargain, drop stipends and jet off with billions. They have no conscience, their only loyalty is to the amount of pillage while in power.

The challenge before the likes of Dr Aliyu is primarily predicated on resistance from the majority thieving elites whose interest is to throw spikes at the wheel of service, truth and justice for all. They are only interested in ‘bring and lets share’ approach to governance not minding what becomes of the baneful poverty doomed majority of Nigerians.

As a seasoned analyst for over thirty years, I am very confident I can place a bet on the Chief Servant as the most credible leader in the country today that can move Nigeria out of the quagmire of economic doldrums, growing trend of terrorism, cerebral corruption especially at the federal level and systemic rot across all strata of administration at the center.

The present huge financial hemorrhage will bleed Nigeria to death if a competent and seasoned technocrat like the Chief Servant is not voted to power. A man with mushrooming cloud of well-placed friends is what Nigerians need as their leader. That man is sure to have all the presently feuding divides across the country reach a mutually beneficial accord, and then once more Nigeria will become peaceful and prosperous.

The misfortune of Nigeria after the sad incident of the 1966 coup where our dear founding fathers were slaughtered is that of a revolving chair of elites who were not prepared for the task of leading the country. The truth is a man who is not prepared or inclined towards leading the country ends up rubbishing the entire system with mistakes and open show of incompetence caused majorly by expert political profiteers who are always around to direct affairs for their own financial gains.

Yes Governor Okorocha I agree with you. Aliyu will most certainly stabilize the flaking Nigeria. He is not a political joke like others before him, he is not self seeking like many before him, he did not just build bridges today but has always crossed over several rivers of relationships before becoming the governor of Niger state. Indeed he has the political mettle to saddle Nigeria right on the horse of speedy development, established and sustained national unity and security for the good of all Nigerians.