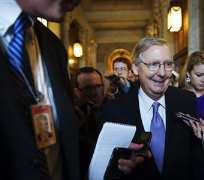 President Barack Obama and U.S. congressional leaders agreed on Friday to make a final effort to prevent the United States from going over the "fiscal cliff," setting off intense bargaining over Americans' tax rates as a New Year's Eve deadline looms.

With only days left to avoid steep tax hikes and spending cuts that could cause a recession, two Senate veterans will try to forge a deal that has eluded the White House and Congress for months.

Obama said he was "modestly optimistic" an agreement could be found. But neither side appeared to give much ground at a White House meeting of congressional leaders on Friday.

What they did agree on was to task Harry Reid, the Democratic Senate majority leader, and Mitch McConnell, who heads the chamber's Republican minority, with reaching a budget agreement by Sunday at the latest.

"The hour for immediate action is here. It is now. We're now at the point where in just four days, every American's tax rates are scheduled to go up by law. Every American's paycheck will get considerably smaller. And that would be the wrong thing to do," Obama told reporters.

A total of $600 billion in tax hikes and automatic cuts to government spending will start kicking in on Tuesday - New Year's Day - if politicians cannot reach a deal. Economists fear the measures will push the U.S. economy into a recession.

Pessimism about the fiscal cliff helped push U.S. stocks down on Friday for a fifth straight day. The Dow Jones industrial average dropped 158.20 points, or 1.21 percent. Retailers are blaming worries about the "fiscal cliff" for lackluster Christmas season shopping.

Under the plan hashed out on Friday, any agreement between McConnell and Reid would be backed by the Senate and then approved in the Republican-controlled House of Representatives before the end of the year.

But the House could well be the graveyard of any accord.

A core of fiscal conservatives there strongly opposes Obama's efforts to raise taxes for the wealthiest as part of a plan to close America's budget deficit. House Republicans also want to see Obama commit to major spending cuts.

Talks between Obama and Republican House Speaker John Boehner collapsed last week when several dozen Republicans defied their leader and rejected a plan to raise rates for those earning $1 million and above.

A Democratic aide said Boehner stuck mainly to "talking points" in Friday's White House meeting, with the message that the House had acted on the budget and it was now time for the Senate to move.

TALKS ON 'BIG NUMBERS'
The two Senate leaders and their aides will plunge into talks on Saturday that will focus mainly on the threshold for raising income taxes on households with upper-level earnings, a Democratic aide said. Analysts say both sides could agree on raising taxes for households earning more than $400,000 or $500,000 a year.

The pair will also discuss whether the estate tax should be kept at current low levels or allowed to rise, the aide said.

Democrat Reid warned of tough talks.
"It's not easy, we're dealing with big numbers, and some of that stuff we do is somewhat complicated," he said.

"So we'll be working hard to try to see if we can get there in the next 24 hours. So I'm hopeful and optimistic," he said.

If things cannot be worked out between the Senate leaders, Obama said he wanted both chambers in Congress to vote on a backup plan that would increase taxes only for households with more than $250,000 of annual income.

The plan would also extend unemployment insurance for about 2 million Americans and set up a framework for a larger deficit reduction deal next year.

There are signs in the options market that investor fear is taking hold. The CBOE Volatility Index, or the VIX, the market's favored anxiety indicator, has remained at relatively low levels throughout this process, but it moved on Friday above 22, the highest level since June.

But some in the market were resigned to Washington going beyond the New Year's Day deadline, as long as a serious agreement on deficit reduction comes out of the talks in early January.

"Regardless of whether the government resolves the issues now, any deal can easily be retroactive. We're not as concerned with January 1 as the market seems to be," said Richard Weiss, a senior money manager at American Century Investments.

Another component of the "fiscal cliff" - $109 billion in automatic spending cuts to military and domestic programs - is set to kick in on Wednesday.

That lifted the immediate threat of a downgrade from the agency, which cut the United States' triple-A rating in August, 2011 in an unprecedented move after a similar partisan budget fight.