JONATHAN, ANENIH AND THE PDP CAHOOTS 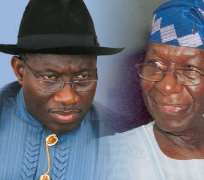 Once again, President Jonathan did not disappoint as he amazed Nigerians with his relentless comic fight against corruption, leaving no modicum of doubt that he is nowhere close to tackling the 'cancer'. His bizarre decisions and actions accentuating his lacklustre combat against graft to new horizons.

This time around, it was the appointment of Chief Tony Anenih, chieftain of the People's Democratic Party (PDP), as the new chairman of Nigerian Ports Authority (NPA), one of the most lucrative agency outside the oil and gas industry and one that has served as an agency of choice for PDP leaders since 1999.

The ineptitude and cluelessness of the PDP and Jonathan led administration came to the fore as the septuagenarian returned to the honey pot he occupied for few years without any impact. In awe Nigerians were made to wonder if there is anything he left behind at the nation's doorway of commerce and industry that he intends to pick up. Or How else can we describe this open show of PDPs shamelessness considering that a former NPA chairman and PDP deputy national leader, Chief Olabode George, not long ago completed his jail term in connection with funds he stole while at the helm of the NPA board. This was the height of comic mesmerism capable of making even lucifer laugh himself to a jerk. Of recent Nigerian memory is the fact that Chief Tony Anenih once served as the Minister of Works of which he misappropriated funds to the tune of N300 billion meant for road construction and reconstruction. Mr Jonathan has raised the ante to appoint him as the new NPA Boss as part of his Machiavellian tactics towards self succession in 2015. Obliviously, Jonathan failed to realise that Anenih has since lost the sobriquet of 'Mr fix it', his political prowess is dwindling and deeming as we can recall that not too long ago Pa Anenih, as the ageing politician should now be addressed, served as the godfather of the trounced PDP candidates in the Anambra and Edo States gubernatorial polls, Prof Chukwuma Charles Soludo and Maj. General Charles Airhiavbere (rtd) .

From the inception of the fourth republic in 1999, PDP has been known for its penchant for celebrating failures, hence, the emergence of Tony Anenih as Nigeria's minister of works during Obasanjo's tenure came as no surprise. Till today, the Nation's highways, like the Lagos-Ibadan , East-West and Benin-Ore roads remain death traps. He left the roads worse than he met them. To him, pillaging state funds meant for road construction became his full time calling. So much was his fleece that till today a good number of the roads have remained in deplorable condition.

In the PDP, their cunning ability to recycle mediocrity has seen Pa Anenih metamorphose from Board of Trustees chairman to minister of the federal republic, then NPA chairman in 2009 and now chairman of the NPA again in 2012. His 2009 role as the Chairman of the NPA was an indirect appointment as Late President Yar'Adua's second term 'campaign manager'. The same strategy is the record Jonathan seem to be playing.

Anenih's indictment during his time at the Ministry of Works without prosecution and conviction reinforces the public belief that some individuals are above the law. To succinctly put, “the anti-corruption law and war in Nigeria is like a cobweb. It is strong to catch the weak but very weak to catch the strong”. This action validates the school of thought that the prosecution of Bode George was a smokescreen, he was only a victim of high level political scheming.

The man that has been deployed to the prime government agency to superintend the activities of the NPA, should remember that it is the same post that landed Chief Bode George in Kirikiri Maximum Security Prison. Edo State Governor Comrade Adams Oshiomhole buttressed this point during his heated face-off with Anenih prior to the July gubernatorial election in Edo state, stating that it was ominous that the last bus stop on the highway to Kirikiri Prison is the NPA chairmanship!

Severally, Mr Jonathan, has demonstrated his willingness to condescend to this base level to ridicule his administration already bedeviled with sleaze, profligacy, impunity and other concomitant effects of corruption.

A leeway to self-succession in 2015 must have necessitated the NPA appointment. The PDP must also be playing out a script to wriggle itself out of the Board of Trustees (BoT) chairmanship tussle. Pa Anenih's juicy post as NPA Boss, will help to divest his interest in the BoT race, giving room for the emergence of former President Obasanjo's anointed candidate. This arrangement is the grand political game plan of the Jonathan administration towards the 2015 elections. Anenih as the Boss of the NPA would ensure he embezzles enough cash and be in high spirit of 'fixation' when the 2015 elections comes around.

The recycling of the old brigade of PDP politicians that have milked the country dry over the years, by the Jonathan government and the PDP at such a time in Nigeria's history, is another indication that Mr Jonathan lacks the will power to bring Nigeria out of the wood.

Mr Jonathan should be aware that Nigerians have given up on any hope of restoration let alone transformation from his administration. He has shown to Nigerians in different shades that is it business as usual with his PDP cahoots. For a man who ran a campaign with a subterfuge that he walked without shoes as a boy, promising zero tolerance for corruption, 'fresh air' and El dorado to turn his back on Nigerians barely two years into his tenure is not fit to be considered for a second term.

Jonathan's tenure will readily go into Nigeria's history books at the end of his four years as one of Nigeria's most corrupt administration if the plethora of reports, investigation and other indices available is a yardstick. Well meaning Nigerians would rather wish 2015 can fast-forward to save us from this leadership plunge.

President Jonathan has shown from this despicable appointment of Tony Anenih as NPA Chairman that his is in Aso Rock to perpetuate sleaze, entrench impunity and sustain the legacy of waste bequeathed to him by his predecessors. It is a cinch that corruption has come to stay in his administration.

As 2015 beckons, Nigerians must be vigilant and vote wisely.