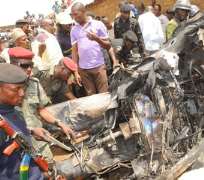 It is no longer news that Nigeria has recorded 42 deadly air crashes in 43 years since September 20, 1969, when a Nigerian Airways flight BAC VC 10 crashed landed, killing all 87 passengers on board. What is now shocking news is the high rate at which Nigeria’s top political and security personnel are killed in what most likely appears as plotted fatal air crashes. They are plotted because they look like bomb or suicide-oriented air crashes.

From verifiable media reports and common sense, the March 14, 2012 police helicopter air crash in Jos that killed the late DIG Haruna John and three other senior police officers (ACP Garuba Yalwa, CSP Alexander Pwol and Sgt. Sonatan Shirinaru) and December 15, 2012 military helicopter air crash at Nembe, Bayelsa State that killed Gov. Patrick Ibrahim Yokowa of Kaduna State and five others( Rtd. Gen. Andrew Owoye Azazi, Dauda Tsoho, Commander Murtala Mohammed Daba, Lt. Adeyemi O. Sowole and Warrant Officer Mohammed Kamal) shared a lot in common(religiously and politically motivated). Competent criminal investigation outcomes would have also revealed semblance of same with respect to the June1, 2012 Dana Air fatal accident in Lagos that killed all the 153 persons on board as well as some residents in the air crash area, unfortunately, Nigerian State security agencies are not only obsolete, but they have abdicated their duties and left same in the hands of quarks like various legislative oversight committees particularly in areas capable of yielding “blood diamonds”.

An effective criminal investigation is a twin brother to effective criminal intelligence. Unfortunately, as we have pointed out at several social forums, the State of Nigeria does not have them and appears not ready to have same in near future going by unfolding sad events. The alarming and shocking part of it all is that while malicious elements holding the State of Nigeria and her peoples to ransom with plethora of security threats, advance in their criminality with their weapons and tactics, the State of Nigeria degrades and retrogresses dangerously. The history of State- plotted fatal air crashes and accidents is not new in Nigeria. On December 1997, under Abacha’s maximum military leadership, the then second in command, Gen. Oladipo Diya narrowly escaped death from a fatal bomb blast at the Abuja International Airport. The bomb was believed to have been plotted from within by the State. On September 26, 1992, 200 young and promising commissioned military officers shockingly perished in an Air Force C 130 fatal air crash, believed to have been plotted from within. The perished officers were referred to as “middle-belt officers”.

On 17th January, 1996, Ibrahim Abacha, son of the then Head of State, Gen. Sani Abacha was killed in a plane crash. The United Front for Nigeria’s Liberation claimed responsibility. On September17, 2006, 12, out of 15 senior military officers died under suspicious circumstances in a military transport plane (Dornier 228) crash. On September 21, 2005, Comrade Chima Ubani, then vibrant ED of the Nigeria’s Civil Liberties Organization died under highly suspicious circumstances in Maiduguri, Borno State, Northeast of Nigeria during nation-wide rallies by the Labour-Civil Society Coalition (LASCO) against planned increases in the official prices of the petroleum products.

Comrade Ubani was the LASCO’s head of strategy set up to forestall any possible compromises by the then Adams Oshoimole leadership of the NLC. Comrade Ubani was made to go through the road with the Vanguard Newspapers’ photojournalist in a car that reportedly belonged to the NLC presidency. The so-called accident was widely believed to be State-plotted, more so when the whereabouts of the secret police agents reportedly accompanying them were not given. On March 14, 2012, DIG Haruna John, then new DIG Operations at the Nigeria Police Force Headquarters got killed along side three other senior police officers (mentioned above) in Jos, Plateau State in a police helicopter crash believed to be politically and religiously motivated. And just dozens of hours ago( 15-12-2012), Governor Patrick Ibrahim Yokowa of Kaduna State and five others including Rtd. Gen. Andrew Owoye Azazi, immediate past National Security Adviser, were killed in a military helicopter crash in Nembe, Bayelsa State, South-south Nigeria. Before his death, believed to have been plotted, Mr. Patrick Yokowa was the elected governor of Kaduna State, Northwest Nigeria, a State widely believed to be the capital of the Hausa-Fulani Islamic intellectual radicalism. Therefore, he may have been seen as “foreign governor” desecrating the “Islamic intellectual caliphate”. Gen. Andrew Owoye Azazi too, may or may not have been politically targeted in the fatal air crash.

Regionally, State-plotted air and land accidents abound. Apart from the State-crime being popularized by the Idi Amin brutal regime in Uganda in the 1970s, cases of such have been reported in some African countries in recent years. For instance, on 6th April, 1994, the plane carrying then Presidents Cyprian Ntaryamira of Burundi and Juvenal Habyarimana of Rwanda were made to crash via suspected ground missiles, while trying to land in Kigali, the capital of Rwanda, after attending peace meetings in the Arusha city of Tanzania so as to end the raging civil wars in the two countries. The two Presidents died on the spot. Their deaths led to the 100 days war of genocide that killed over 800,000 Tutsis and moderate Hutus. On July 30, 2005, then Col. John Garang de Mabior of the South Sudanese People’s Liberation Army (SPLA/M) was killed in a military helicopter crash in the borders between Uganda, Kenya and Sudan, while returning to his regional capital of Juba after signing a peace treaty with his Sudanese counterpart, Gen. Omar el-Bashir. The helicopter belonged to President Yoweri Museveni of Uganda, who was his close ally. The late Col. John Garang de Mabior was believed to have been killed under circumstances plotted by the State. Further instances are numerous to mention.

Therefore, the recent air crashes in Nigeria, particularly those of March 14 and December 15, 2012, and possibly, that of June1, 2012, may most likely be the handiwork of compromised and radicalized elements within the country’s security forces, indoctrinated and brainwashed in the art of sectional and religious fundamentalism by their local sponsors and foreign technical partners. Already, jubilations are taking place in all Muslim communities in northern parts of the country and beyond, thereby attesting to this position of ours. The malicious elements under reference may have thrown to the wind and compromised their professional/ law enforcement oath of honour, code of ethics, code of conduct and canons of policing /law enforcement ethics, and settled radically for their opposites under religious fundamentalist ethical dilemmas. In other words, to them, it is sectional/religious interest first and national interest and national security second. These methods of killing highly placed Nigerians “under clean job or perfect crime” circumstances may also have been brought about by the reported “technical partnership” between Nigeria’s armed Islamists and the advanced groups of same in the Northern part of Africa such as Algeria and Somalia. If this is true, then Nigeria’s top political class citizens and leading vocal voices on socio-political issues including human rights, particularly non-Muslims and moderate Muslims are dangerously endangered except God divinely decrees otherwise.

The porosity and gross incompetence of Nigeria’s security forces may have given room for the infiltration of same by these radical and malicious elements working in collaboration with their local sponsors and foreign “technical partners”. Sadly, the country’s security and investigative intelligences are so obsolete, disorganized, porous and incompetent that they are thousands of miles away from matching these opponents, intelligence for intelligence and technical know-how for technical know-how. Asymmetric warfare does not require brandishing or displaying of small arms or flooding of same at every nook and cranny of the country. It simply requires super technical and intelligence know-how. We reiterate our recent calls contained in our far-reaching recommendations to the Attorney General of the Federation & Minister of Justice, which were copied to ten other top relevant political authorities including President Goodluck Jonathan that the country and battery of her anachronistic security agencies must go back to square one of their drawing board so as re-brand them to be brought in tune with modern concepts, policies and practices of securitization. No amount of calls for foreign helps will succeed because terrain is the hallmark of every local security challenges just as criminal and investigative intelligences are the main pillars of criminal justice system.