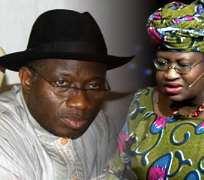 A rare good news for Nigerians: two prominent Nigerians made the list of the '100 Top Global Thinkers of 2012' according to Foreign Policy magazine. They are Prof. Chinua Achebe, for 'forcing Africa to confront its demons' and Dr. Ngozi Okonjo-Iweala, for 'showing Africa how to break the resource curse.' While the inclusion of Chinua Achebe is welcome without hesitation, the inclusion of Dr. Okonjo-Iweala vis-a-vis the record monumental corruption in the Nigerian oil and gas sector may raise some eyebrows.

While I agree with Dr. Okonjo-Iweala on the concept of oil subsidy removal, I disagree with her on the roadmap. While Dr. Okonjo-Iweala believes that our resource curse will be reversed by simply removing subsidy, I believe that corruption and corrupt practices in Nigerian oil industry remains the main problem and as such, should be the starting point.

Of what use is oil subsidy removal for a government that cannot account to its crude oil production(with a fifth of our crude oil stolen), running an inefficient and oversized NNPC with dilapidated refineries? Of what use is oil subsidy removal in a country that spends over 70% of its budget on recurrent-expenditure, servicing bogus and extravagant lifestyle of the executive and legislative arms of government? Has Dr. Okonjo-Iweala learnt anything from the present subsidy scam with President Jonathan’s unwillingness to prosecute the likes of Otedola and co that financed his campaign?

I sincerely hope by now that Dr. Okonjo-Iweala has realized that she is being used by the GEJ administration as a camouflage while confusion and corruption reigns. To truly succeed in helping Nigeria overcome the oil curse and corruption, Dr. Okonjo-Iweala must force President Goodluck Jonathan to confront the demons in his (himself) administration. To help her, I came up with ten provocative demands she should confront Jonathan with.

Then Dr. Okonjo-Iweala should turn in her resignation, tell Jonathan to call her when demands 2 - 10 are met, quietly go home and think. Between oil subsidy removal and addressing the oil theft and government-assisted corruption in the oil sector, she should take time and think about what should come first. Critical thinking, that's what 'Global Thinkers' do.