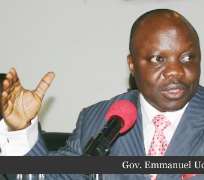 Delta State governor, Dr Emmanuel Uduaghan  has charged the people of Ogwashi-Uku and the Okonjo royal family not to take the laws into their hands as the Government was doing everything possible to rescue the abducted queen of the kingdom, Prof kamene Okonjo.

Besides, he assured the royal family of Professor Obi Chukwuka Okonjo and the entire people of Ogwashi-Uku that Prof. Kamene Okonjo, mother of the Minister of Finance, Dr Ngozi Okonjo-Iweala, would be returned safely and in good state of health.

The Governor, who gave the charge yesterday at Ogwashi-Uku when he visited the family in the palace, stated that law enforcement agencies in the state were already in the field gathering information as well as tracking down the perpetrators to ensure her safe return.

In particular, he enjoined the community leaders, vigilante groups and the entire Ogwashi-Uku community to remain calm and not to take any action that may prompt the kidnappers to act in rash manner that may be detrimental.

He stressed that only peaceful disposition as well as collaboration and cooperation with the law enforcement agents would ensure the desired objective at this point in time.

Dr Uduaghan urged the people not to be involved in rumours mongering as it was capable of jeopardizing the on-going rescue efforts, explaining that only useful information would be required as the situation was delicate.

'Please do not get involved in rumours mongering and trading stories that will not help law-enforcement agents. Only information that will help in her rescue is needed now', he stated.

The Governor said that the perpetrators of the crime would be tracked down and brought to book adding that law enforcement agencies in collaboration with the government will not rest until they were apprehended and brought to book.

He assured the Okonjo family that everything was being done to ensure the safe return of Prof Kamene's, explaining that all hands were on deck to arrest the suspect.

Emphasizing further, he said 'I have been in touch with officers of various law enforcement agencies and I assure you that Prof Kamene will be safely returned. The perpetrators of such a despicable crime will be brought to justices'.

The Odafe of Ogwashi-Uku Olizele Ogochukwuka Nkwor in a brief remark thanked the state governor, Dr Uduaghan and his administration for the efforts in ensuring the safe return of prof. Kamene Okonjo.

He assured the governor that the people would assist law enforcement officers in the search and return of Prof Kamene.