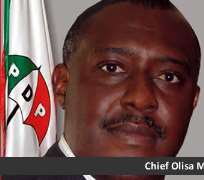 The ruling Peoples Democratic Party (PDP) on Monday expressed confidence that the present administration will win the war against corruption ravaging the country.

A statement by the National Publicity Secretary of the PDP, Chief Olisa Metuh said the “Party is optimistic that its battle on corruption would be won with the bold institutional framework the PDP led Federal Government has put in place and with the collective efforts of all Nigerians.”

The Party however described the attempt by the Action Congress of Nigeria (ACN) to “slur the integrity of the anti-corruption efforts of the Federal Government as a symptom of a one-track minded political party unable to appreciate the pre-1999 deprecate societal fabrics that the PDP met.”

Recalled that Transparency International (TI) recent ranked Nigeria 35th most corruption nation in the world, a position the Federal Government regarded as a wake up call.

The ACN however described the ranking as a reflection that the present administration was not fighting corruption.

The PDP however said “No government in the history of Nigeria has attempted the bold initiatives that our party has taken to fight corruption. The PDP led Federal Government created the Economic and Financial Crimes Commission(EFCC)  as well as the Independent Corrupt Practices Commission(ICPC). No matter the criticisms trailing their performance, these bodies have posted degrees of successes.

Most importantly, these institutions are meant to outgrow partisan practices and given time, become inviolable winnower on the chaff of corruption.

” in a similar vein, for the first time in our history, a government emphatically voted for a free society with the enactment of the Freedom of Information law so that Nigerians irrespective of class shall be fully informed and have access to hitherto classified pieces of information; the bottom line being to make governance collective and participatory; so that each Nigerian at any level is enabled to pick up the gauntlet against corruption.”

The statement continued, “the worst form of corruption is the one that annuls the will of the people . This, the PDP led government has successfully waged war on.

For the first time in the history of our dear nation, a government made good its promise of  free and fair elections.

“The 2011 general elections in which President Goodluck Jonathan participated as an incumbent was adjudged locally and internationally as the most incredible in our recent records. The subsequent state governorship elections which the Ondo election is the most recent have towed the same path.

” A comparison with the electoral shenanigans and bare faced robbery that go on in the opposition controlled States in the name of local government elections as witnessed recently in Ogun and Lagos States is just one out of myriads of ways the ACN is throwing spanner in the wheel of anti- corruption.”

The statement added “Under the PDP led Federal Government, the nation has witnessed high profile probes as well as convictions. The National Assembly under the leadership of our great Party has also upped the scrutiny in its over sight functions.

” Even though we are making no claims to having stamped out corruption, we insist that appreciable progress is being made. Yes, there is corruption but corrupt persons know full well today that the loop of the long arm of the law is not in any way broken; that questions must come up if not immediately, definitely later.

” But what is the ACN’s contribution to freeing our  society from corruption as a Party controlling six out of 36 states of the Federation?”, PDP asked.

” A physician who refuses to clear the huge logs in his eyes and struts into the theatre will not only grope in the dark but headed for incalculable damage on his chosen profession”.

“When the ACN pontificates on corruption, it carefully grows forgetful of the fact that the states under it are the bastion of corruption; that its National Leader is neck deep in corrupt practices and that  one man’s greed is feeding fat on tax payers money in the six states .

” When the ACN makes claim to sainthood”, the statement added, it cleverly forgets that the gigantic question mark on the claimed educational credentials of its leader is a monumental crisis on the psych of the current and up coming generations of Nigerians and that such blatant fraud is the cradle of corruption in the larger Nigerian society”.