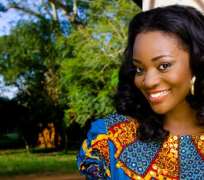 Following a 'graphic' sex scene she acted in an upcoming movie titled 'Death After Birth', Ghanaian award-winning actress, Jackie Appiah, is being trailed by a barrage of accusations, among which is infidelity.

As a result, I heard the babe is in a serious battle at the moment trying to convince everyone that “nothing happened”.

Days back, gist started spreading like wildfire in Accra and Kumasi that Jackie was indeed having an illicit affair with a radio presenter turned actor, Abeiku Santa. And guess what, this story is causing some heat for the babe at the home front.

Sources in Ghana said the sex scene even caused a fight in the studios of Okay FM as Abeiku and his friend, Kwame Amoo, nearly exchanged blow.

The two were said to have rained invectives on each other over the matter. So in a bid to save her face and possibly her marriage, the woman in the middle of the storm, Jackie Appiah, has denied ever making 'real' love with Abeiku.