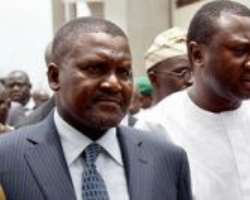 One of Africa's richest men and Nigeria's only billionaire, Aliko Dangote, said Thursday that a list of debtors published by the Central Bank that cited him as owing millions of dollars to two banks was inaccurate, and he chastised the Central Bank for not alerting the affected parties before the list was made public.

"I don't think they understand the consequences of what they've done," Dangote said in an interview with Dow Jones Newswires Thursday evening. "The Central Bank should have at least checked with people before going to press."

"For [the Oceanic Bank] debt we've sent a check to the bank, and they've collected it and given us a receipt that they have it," Dangote said. "For a group like ours, two and a half billion naira, that is actually just about 10% of our cement turnover per month. We're a well-diversified organization."

A Dangote official said later that Dangote Industries Ltd. had recently paid Oceanic Bank NGN 3.1 billion for its debt and other fees. They did not say when they had paid off the debt.

A senior government official affiliated with the Central Bank admitted that there may have been mistakes in the debtors list released Wednesday, and that since it was for debts not paid through the end of May, some debtors may have settled their loans in the interim.

Dangote denied outright any involvement in Dansa Oil & Gas, and said that his nephew, who has a similar name, is the managing director of that company. Dangote said that he wasn't aware of the problems associated with Dansa Oil & Gas until he went into work on Wednesday.

"They saw Ali Dangote and they just made their conclusion and used my name in full and said we are owing Intercontinental almost NGN8.9 billion. I didn't know about the company except when I got to the office Wednesday and I said bring me the documents."

In the wake of a $2.6 billion bailout of five near-insolvent banks last Friday, the Central Bank of Nigeria took the unprecedented step of publishing a list of the top debtors to the five bailed-out banks. The list read like a who's who of Nigeria's business elite, and included Dangote's name twice.

It also included the other Nigerian on Forbes' most recent list of billionaires, Femi Otedola, whose fortune was recently estimated to have dropped from $1.2 billion to $500 million after stock losses.

The debtors list also named the director general of the Nigerian stock exchange, the former governor of Nigeria's richest oil state, several oil and gas companies, and the Ministry of Finance, among others.

Dangote is one of Africa's most high-profile success stories.

He is the chairman of Dangote Industries Ltd., a conglomerate which controls significant portions of the Nigerian cement, rice, sugar, flour and oil marketing industries.

Nigeria, buoyed by high oil prices in 2006 and 2007, saw lending increase drastically. But there didn't exist reliable oversight bodies, including a credit rating agency, and when oil prices plummeted, many companies, and the banks that lent to them, bore the full brunt of the fall. Many banks loaned to companies that had already accumulated bad debt from other banking institutions.

Dangote said that despite the recent economic downturn in Nigeria, his cement company's operations are thriving.

"We are still expanding," he said. "We are not slowing down at all. There is no economic meltdown."