RECALLING THE NATIONAL GOOD GOVERNANCE TOUR OF THE FCT 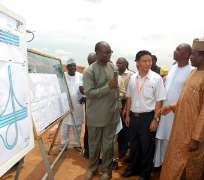 The National Good Governance tour, initiated by the Federal Ministry of Information to educate Nigerians on Federal Government efforts to develop the nation took off on Thursday, 20th September, 2012 with visits to projects around the Federal Capital Territory.

It became apparent from the inspection tour that the majority of Nigerians do not know that several projects are currently under construction and that many service facilities meant to improve the living standards of the people have already been completed and put into use.

Federal Government-financed projects consisting of road networks, bridges, water pipes, communications facilities, electricity services, town development processes, housing estate projects and the expansion of essential resources to meet the demands of the expanding population in the city are going on at different levels and paces within the capital territory.

The three-day tour of the Federal Capital City spearheaded by the Information Minister, Mr. Labaran Maku presented an educative discovery which showed that Abuja has become a huge construction theatre with work going on simultaneously on several projects and essential services in various parts of the city.

From the onset, the information minister made it clear that the projects to be visited by the inspection team were initiated but abandoned by previous administrations. He pointed out that the Goodluck Jonathan regime has resolved to complete every abandoned project before the expiration of its tenure in 2015.

During the tour of the FCT by more than 100 journalists and members of civil society groups, different categories of projects at various stages of completion were inspected. The information minister gave ample time for questions and free comments from contractors handling the projects as well as from reporters. Participants applauded the openness of interaction between the inspecting team and officials especially contractors. No attempts were made to doctor or restrict questions and answers or what types of responses are given to inquiries.

Five major complaints were repeatedly put forward by contractors and government officials. These were inadequate funding, the prolonged delay in the release of funds to contractors, requests by service providers for re-evaluation of contracts, interruptions caused by the rainy season and resistance to development by Abuja indigenes agitating for resettlement and compensation for land acquired by the government.

It turned out that the Federal Government plans to spend more than N5. 5billion in the years leading up to 2015 on various development processes, the provision of basic infrastructure such as access roads, water, electricity, sewage systems and other public facilities in the capital territory.

On the first day, the trip started on a disorderly note but the inspection train visited the Abuja Rail Mass Transit Project designed to transport large numbers of people and goods between the Satellite towns and the Federal Capital City [FCC]. About 178 plots were acquired for projects connected to the rail project which was planned to crisscross the six area councils of the territory to ease transportation problems.

The inspecting team was told that the rail contract which was awarded to the China Civil Engineering and Construction Company [CCECC] in May 2009 at a sum of USD$823,540,545. 87 has reached forty percent completion stage. When completed, about twenty modern diesel trains would transport more than 500, 000 people daily between the Satellite towns and the Federal Capital City at a speed of 100 kilometres per hour.

The rail line project which has vast provision for extension to connect Abuja with nearby states through the national rail network was funded with money from the China Exim Bank. The bank offered the Federal Government USD500 million loan facilities at a favourably low interest rate but the government was required to fund the project with its own resources to the tune of $300 billion.

China Civil Engineering and Construction Company [CCECC], the contractors handling the project, complained that the work has not moved with the anticipated speed due to delays by government to release funds. About 5,000 Nigerians are currently engaged in various capacities on the rail project, which the handlers assured, would be completed in the next thirty-six months.

Other ongoing projects included the development of communication satellite systems. Nigeria has already launched four commercial satellites into space for mapping, communications, earth observation and weather focast. The inspection team was also taken to fast lane express roads under construction, a huge water treatment plant expected to supply more than one million gallons of water a day to the city and new districts being developed to expand the capital.

The Federal Capital Territory Minister, Senator Bala Mohammed who accompanied the delegation on tour of some parts of the territory, disclosed that fifteen new districts and nineteen new satellite towns would be opened in the capital before the end of 2015 to decongest the city centre. Already, work has commenced on five of the districts for the provision of basic facilities especially roads, water, sewage systems, electricity and underground network of cable routes at a cost of more than N2. 2 billion.

Senator Bala Mohammed, who spoke on the difficulties of land administration in Abuja, disclosed that every land space in the existing districts was sold out by previous administrations. He said the problems inherited by the incumbent government in land administration were so huge and included abuses and distortions such as allocation of the same plots to several people, saying that double allocation of plots alone has become a monstrous problem in the territory.

Senator Bala also said that the demand for Abuja land has risen dramatically and disclosed that a backlog of one million applications from Nigerians for land in Abuja was currently pending in the Federal Capital Development Authority office. Other challenging problems of land administration in Abuja, according to the FCT Minister, was the lingering issue of compensation and resettlement of indigenes that vehemently refused to move out of development areas allocated to developers. Senator Mohammed said the Federal Government has decided to adopt the United Nations resolution on resettlement and compensation to resolve the problem but he could not say how soon the policy would commence.

The minister however warned that the abuse and disregard of Abuja Master Plan as it affects land development must stop even as he pointed out that the FCT administration has wasted so much time and resources correcting distortions and violations by developers who connive with land officers to cut corners. “We cannot condone impunity in land use and unplanned construction of unapproved structures in the Federal Capital Territory,” the minister warned at one point.

Amazed journalists were also shown the ongoing construction of a replica of the World Trade Centre Twin Towers destroyed by religious extremists in 2001. The 37-storey Abuja Commercial Twin Towers being constructed by Churchgate Construction Company at the cost of billions of naira is located in the high-brow Central Business District and would be accessed through a fast-lane expressway already nearing completion.

Other projects visited by the media team included on-going rehabilitation and expansion of the outer northern expressway awarded to Dantata and Sawoe Construction Company in May 2009 at the cost of N66.83 billion, the rehabilitation and expansion of the outer southern expressway awarded to Messrs Salini Nigeria Limited in 2010 at a total cost of N13. 38billion.

Also, under construction are the Kubwa, Idu, Wuye, Kabusa districts which are among the 15 new districts and 19 satellite towns planned for Abuja. The lower Usuma Water Treatment Plant, the Airport Express Project, the new passport office and the Nigeria Civil Defence Training Institute were also inspected, among others. Many other projects were left out because the three days allocated for the tour of the projects within the Federal Capital Territory was not sufficient.

Inspecting journalists and civil society observers agree that Abuja has, however, become a huge construction area with work going on at the same time on numerous projects requiring a large portion of financial resources and manpower.

The three ministers who accompanied the journalists on the project inspection tour, namely Mr. Labaran Maku of the Information Ministry, Senator Bala Mohammed of the Federal Capital Territory and Alhaji Samsudeen Usman of the National Planning Commission expressed delight with the level of progress on the projects visited.

Mr. Labaran Maku of the Information Ministry was visibly elated and felt justified by the performance and promises of the contractors handling the projects who pledged to fast-track work to meet the target completion date of 2015 once funds are released to them so that President Goodluck Jonathan can commission the projects himself before 2015 elections.

The minister who felt challenged by criticism of the present regime passionately berated critics of the administration throughout the tour and sections of the press that provide “cheap platforms for blind criticism” while calling on the media to honestly tell the world the truth about development processes in Abuja in the spirit of developmental journalism.

He also urged journalists to personally monitor ongoing Federal Government projects after the National Good Governance tour and to report truthfully on the performance of contractors and information provided at the guided tour.

Maku said: “We inherited these projects and we do not want to leave them for another administration. Contractors are placed on notice that we would not let them rest until they deliver on their promises. Abuja is emerging into a truly sophisticated city comparable to others in any part of the world and we are in a hurry to deliver to the people this modern city.