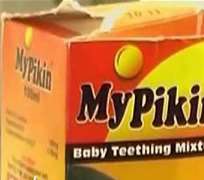 Manufacturers of “My Pikin'' teething mixture, Barewa Pharmaceutical Company, has asked a Federal High Court, Lagos, to strike out its name from the ongoing case over alleged manufacture and distribution of adulterated drug.

Mr Osaro Eghobamien, the company's counsel, made the application at the resumed hearing of the case on Monday.

Barewa Pharmaceutical Company, the fourth defendant; its CEO, Gbadegeshin Okunlola; and two of its staff – Adeyemo Abiodun and Egbele Eromosele, have been facing trial since March 8, 2009.

The National Agency for Food and Drug Administration and Control (NAFDAC) is prosecuting the accused person.

Okunlola, a pharmacist, however, died on Oct. 27 at the age of 58 compelling the court to strike out his name from the charge.

Eghobamien prayed the trial judge, Justice Okechukwu Okeke, to strike-out the name of the company following the death of the first accused Okunlola.

He also asked the court to strike out the name sought to replace that of the deceased CEO, arguing that the offence for which Okunlola was charged was based largely on personal intent.

According to him, nobody should be made to stand trial in place of the late CEO's.
The counsel noted that though the company was a legal entity, the director who was primarily responsible for the offence was now dead.

Eghobamien submitted that the death of Okunlola should ordinarily have brought the case to an end.

According to him, it would amount to malicious prosecution to attempt to substitute the name of the dead CEO with that of another director.

He said that since the offence for which the deceased was charged clearly touches on mens rea (intention), it suffices that only the deceased could answer for it.

Rejecting the argument, Justice Okeke said that such argument could not be made at this stage of the proceeding, when no person had been produced to replace the deceased.

Okeke also said that it would only be just for the court to make an order whatsoever, when the amended charge was read to all the accused, their pleas taken, and arguments made.

“I cannot shut out the first accused in this case, since he is yet to be brought before me.

“I cannot take steps against an accused not standing trial before me,” Okeke said.

Meanwhile, the prosecutor Mr Aminu Alilu, informed the court that it was still liaising with the defence counsel to get a substitute for the late Okunlola.

The judge, however, ordered the prosecutor to first ensure that statements are extracted from such proposed person, before charging him to court, adding “the prosecution must avoid malicious prosecution''.

He then adjourned the matter to Dec. 10, to give prosecution ample time to produce a substitute for the deceased.

At the arraignment of Okunlola and the other accused, they had pleaded not guilty to the charge of manufacturing and distributing the adulterated teething mixture, which allegedly killed about 80 babies.

The offences, the prosecutor said, contravened Section 1 (a) of  the Counterfeit and Fake Drugs and Unwholesome Processed Foods (Miscellaneous Provisions) Act No. 25 of 1999 and punishable under section 3 of the same Act. (NAN)