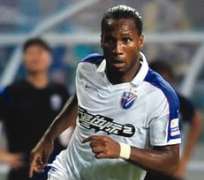 Didier Drogba
Didier Drogba's hopes of an immediate move to a European club from Shanghai Shenhua have been dashed by FIFA.

The Ivorian striker was being linked with a loan move to former club Chelsea after the Chinese Super League ended this month.

The 34-year-old requested special permission to join another club outside of the international transfer window to maintain his fitness levels ahead of the African Cup of Nations, which starts on January 19 in South Africa.

Drogba has insisted that the African tournament remains a priority.

'The most important is to arrive at the Afcon 2013 in full possession of my abilities. What is important is to remain in this environment, and to be efficient in the upcoming Afcon. It is a competition that is very close to my heart,' assured the former Chelsea striker.

Drogba and his teammates were runners-up in 2006 against Egypt and in 2012 against Zambia, and this time they will let nothing stand in their way of the title.